Stars team up for ‘Next to Normal’

Stars team up for ‘Next to Normal’ 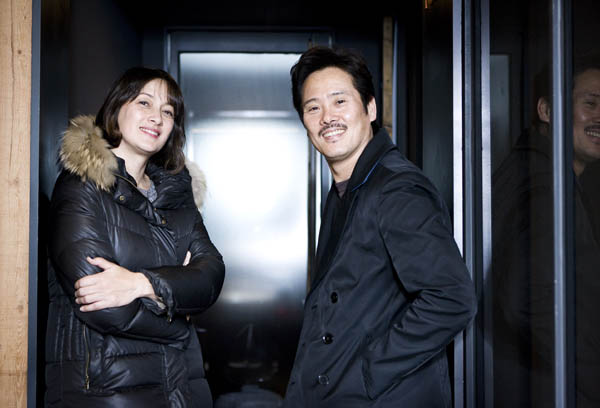 Kolleen Park, left, and Nam Kyung-joo will play the protagonist couple for the third time in the musical “Next to Normal,” which opens on Wednesday. [KWON HYUK-JAE]

Two influential figures in the musical scene are teaming up for a third time for the upcoming rock musical “Next to Normal.”

Kolleen Park and Nam Kyung-joo, who are dubbed the “first generation of Korean musicals,” will play the protagonist couple - Diana and Dan - for a third time in the local version of the musical, which began on Broadway in 2009.

It revolves around the family of Diana, who suffers from bipolar disorder, and their hardships and efforts to deal with them. The intimate depiction of mental struggles earned the musical much praise, leading to three awards at the 2009 Tony Awards as well as the Pulitzer Prize for Drama the following year.

“It is a piece that all musical actors covet,” Park said.

“Next to Normal” is the only musical Park has acted in while she focuses on building a career as a musical director, with projects such as “The Last Empress” and “The Phantom of the Opera.”

Nam is also dedicated to the piece, saying he would “drop everything in order to do the project again.”

The JoongAng Ilbo met with the duo earlier this month at a cafe in Jeongneung-dong, central Seoul. “Next To Normal” will kick off its first performance on Wednesday and run through March 13 at the Doosan Art Center in Jongno District, central Seoul.

Q. This is the third time the two of you are starring in “Next to Normal.” What is so charming about this musical?

Nam: It talks about alienation and lack of communication among family. It sounds like a special story, but when you think about it, it applies to almost every family in contemporary society.

Park: It has all the elements that make a great musical. First, there is a touching story, and then the right music pieces coming in at the right moment. The set is amazing, too. When I first experienced this musical on Broadway, I immediately called Korean musical producers and talked about how great it was.

What message do you think this musical will send to the audience?

Nam: I don’t expect anything special. But I remember being very bothered by audience members who were crying too much during the first and second runs of this musical. Maybe they were remembering the darkest and most hurtful memories hidden inside them. I believe that they will have become purer and more mature through that experience. When I have one or two of this kind of audience member at this show, I think I will have done my job.

Park: It’s up to the audience what they get out of our musical. A performance cannot fix each and every problem going on in their lives, but we can touch on them.

What do you think about the current musical scene?

Nam: Thirty years ago, there were only three to four musicals being staged per year, but now there are about 200. The situation has become too good, too fast.

Park: With local musicals depending too much on having celebrities in their projects, it has become worse for musical production companies. Producing cookie-cutter projects won’t lead to a bright future for musicals.