[Sponsored Report] LSIS gets ahead through smart manufacturing

[Sponsored Report] LSIS gets ahead through smart manufacturing 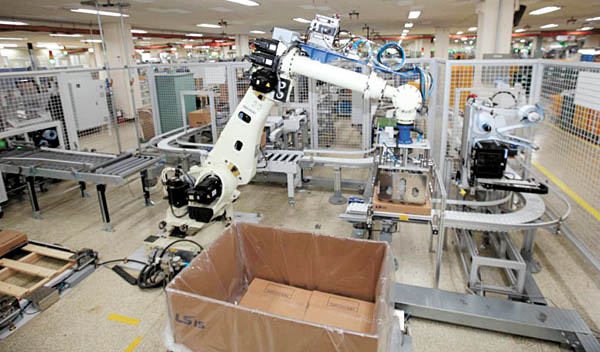 At an LSIS factory, a packaging robot selects the appropriate box size for each product based on the product’s weight as measured by an automatic sensor. [LSIS]

LSIS, a major domestic supplier of electric generators, has been increasing its capabilities through smart manufacturing.

The company’s factory in Cheongju, North Chungcheong, is run by a flexible manufacturing system that determines output in advance based on estimated demand. Not only does the advanced planning system control the production line - assembly, testing and packaging - it also integrates the production management process with receiving orders, production planning and ordering materials.

LSIS began investing in smart factories in 2010. The company’s intent was to reshape the manufacturing process using information and communications technology into one that could accurately respond to the needs of consumers. By applying new systems such as real-time monitoring and auto-analysis, the factories were able to take timely measures against defects and increase product quality.

The results exceeded expectations. The time spent on equipment maintenance decreased by 50 percent, while overall productivity increased by over 60 percent. For 38 products on the low-voltage equipment line, daily output increased from 7,500 to 20,000. The ratio of defective products dropped to eight parts per million, comparable to other smart factories worldwide.

Smart manufacturing proved to be not only productive but also efficient, reducing energy use by 60 percent. The number of workers required per line also fell by half, allowing the company to relocate human resources to the development of new product lines.

LSIS invested primarily in the Energy Management System, which monitors and improves energy efficiency, and the Programmable Logic Controller, an industrial computer control system. The latter has already gained recognition as the best in the country.

Meanwhile, to further expand the smart manufacturing system on a national level, LSIS opened its factory to visits by small and medium-sized companies and continues to provide technology education. By doing so, the company is helping to promote smart manufacturing, which is a major goal of the Industry Innovation Movement 3.0 released by the current government. Last October, LSIS signed memoranda of understanding with BRAINNET, eMainTec and UDMTEK, all mid-sized companies that are taking the lead in automation software.

“Automation in the manufacturing process has highly improved productivity and energy efficiency. But what’s more is that it has also brought satisfaction to both customers and our workers,” an LSIS spokesman said.

“We will continue to enhance the ‘smart’ level of our factories, and we also hope that our efforts will encourage innovation in the manufacturing industry as a whole.”