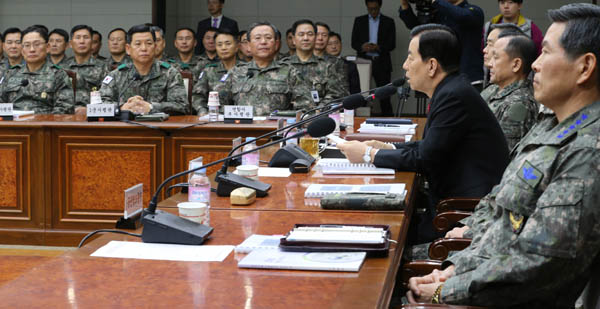 Defense Minister Han Min-koo speaks on Monday as he presides over a biannual meeting with some 140 defense offi cials at the Ministry of National Defense in Seoul, during which Han said North Korea was showing a will “for military provocation.” [SHIN IN-SEOP]

Fueling speculation about the cause of the sudden cancellation of a much-anticipated performance by the Moranbong Band in Beijing, Chinese authorities started censoring posts on portal sites and social networking services related to the North Korean girl band.

North Korea’s Moranbong Band was scheduled to perform at Beijing’s National Center for the Performing Arts on Saturday evening as a part of a goodwill tour that was to last for three days. The band withdrew hours before the invitation-only concert began, returning to Pyongyang via Air Koryo. They had traveled to Beijing by train.

When the cancellation of the concert was first being reported Saturday, the news was on the front page of Weibo, the Chinese version of Twitter, and categorized as “Today’s hot issue.”

There were tens of thousands of posts about the band on Weibo. Some praised the beauty of the band members from photos snapped at their hotel in Beijing, including remarks such as, “They’re much prettier than South Korean girl groups.”

But starting from late Saturday, the messages started disappearing. By Sunday, they were gone, indicating that Chinese authorities were censoring any posts related to the Moranbong Band. Articles on the band disappeared from websites, as well. A photo caption from Chinese newspaper Huanqiu Shibao on Monday saying that “the effect of the cancellation of the North Korean performance is limited” suddenly disappeared from its mobile application.

On the official side, a photo of Song Tao, head of China’s International Liaison Department, shaking hands with Choe Hwi, first deputy director of the North Korean Workers’ Party’s Central Committee - who was in charge of the Moranbong Band’s visit to Beijing - was deleted from the Chinese Communist Party’s homepage. It was posted on Thursday.

The band, formed in 2012 and apparently handpicked by Kim Jong-un, is composed of svelte women who can sing, dance and perform electric and classical instruments. The Chinese public showed a keen interest in the group, even resorting to buying tickets on the black market.

Chinese state media abruptly reported Saturday that the concert was canceled because of “communication issues at the working level.” There could be a number of underlying reasons why the band members bolted at the last minute, accompanied by North Korean Ambassador to China Ji Jae-ryong.

“There are many rumors, but they are only speculation,” a senior China source told the JoongAng Ilbo on Monday. “I know the reason, but I’m not in a position to speak of it.”

News reports speculated that Pyongyang was dissatisfied that China had decided to send a low-ranking official to the Moranbong concert instead of a member of the Politburo Standing Committee of the Central Political Bureau, the Chinese government’s top leadership body. Beijing reportedly was sending a vice-ministerial official following news reports Thursday that quoted North Korean leader Kim Jong-un saying his country had developed a hydrogen bomb.

Other reports said that Pyongyang was offended by unflattering media coverage of the Moranbong Band.

But Chinese Foreign Ministry spokesman Hong Lei said on Monday that he has “no information to offer” on the concert’s cancellation other than what was reported by the state-run Xinhua News Agency.

South Korean defense officials are concerned that the mysterious cancellation of the Moranbong Band performance in Beijing on Saturday may lead to missile or nuclear tests by the North, especially if this incident is an indication of a falling out between Beijing and Pyongyang.

“Following North Korea’s sudden cancellation of the Moranbong Band, we cannot rule out the possibility that Pyongyang and Beijing’s relations may become estranged again,” a South Korean defense official said during a meeting of top military officials held in Seoul on Monday. “Our army will have to pay attention to North Korea’s strategic and tactical provocations.”