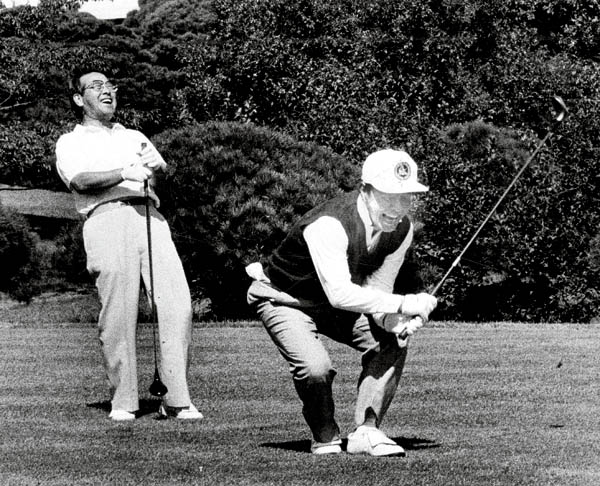 Kim Jong-pil, left, and Kim Young-sam laugh during a golf outing on Oct. 2, 1989, in Anyang, Gyeonggi, when they led two different opposition parties. The two Kims merged their parties with the governing party the following year. [JOONGANG PHOTO]

A German political and economic scientist once said politics is the art of relinquishment. In that sense, an essential part of politics is knowing when to push a goal - and when to give up.

By definition, history is a recollection of things that occurred - and things that shouldn’t have. Putting them in perspective shows the logic of politics.

In early 1989, I indulged myself in figuring out what I should strive for, and what I should relinquish, in my political career. Voters gave lawmakers from the opposition the majority in the Assembly to keep the government in check. But the lawmakers’ lack of experience and capabilities soon became obvious. The political establishment was overwhelmed by the divisions of regionalism and factionalism for which political leaders, including myself, were responsible.

The opposition parties competed to posture against the Roh Tae-woo government, while the Roh government could barely function as a normal governing power. A sense of powerlessness swept the ruling party and the government after they couldn’t even get a nomination for the Supreme Court Chief Justice approved by the Assembly. I, as leader of the fourth-biggest political party, felt I hadn’t done enough to break the impasse. I looked for a breakthrough.

At the time, the geopolitical world entered a big bang stage. Eastern Europe was enjoying economic and political opening to the West as evidenced by the Perestroika movement led by Soviet President Mikhail Gorbachev. The direction ahead seemed clear to me. We needed to open up diplomatic ties with countries in the north [including the Soviet Union and China].

In 1962, I shouldered the heavy burden of starting diplomatic ties with Japan, which sparked fierce resistance. I took the job because Korea had to use Japan as a gateway to reach the rest of the world. And 30 years later, we had a brand new opportunity to reach into a long-forbidden continent that shunned Korea entirely due to ideological differences.

The so-called Northward Policy seemed especially important as South Korea had to prepare for reunification with North Korea someday. I mulled over how I could to serve the nation and concluded that I must throw my support behind President Roh and his Northward Project.

In a meeting with Roh at the Blue House on Aug. 22, 1988, I stressed the importance of redrawing the conservative political landscape in a reformative manner through mergers of political parties. I met Roh again at the presidential office on March 7, 1989, and had a three-hour dinner.

Over dinner, I told Roh, “You are now pushing a number of projects, including the Northward Policy, but none seem to be working given the current distribution of power in the Assembly. If you can’t reach out to the Communist bloc in the north now, you will never have another chance. The future of the country hinges on this. Let me help you achieve it.”

Roh listened carefully to what I was saying.

“Let’s merge our parties,” I told him. “Our 35-legislator party will form a majority in the parliament through a merger with yours. When you have a majority, you can guide the country. This is a decision we must make for the sake of the country.”

Roh, while obviously startled by my proposal, eventually welcomed it. Grasping my hands, he said, “Okay, let’s do this in the coming days.”

Preparations for a merger began behind the scenes. With 129 seats held by the governing party, the merger with my New Democratic Republican Party’s 35 lawmakers easily pushed us over the majority 150 seats.

At the start, progress was slow on the merger. Roh was apparently not dealing in a straightforward manner. I later found out why. Park Chul-un, a policy advisor to Roh, advised him to also consider inviting the Unification Democratic Party led by Kim Young-sam, which had 59 lawmakers. Roh was intrigued by the proposal. The idea must have also interested Kim Young-sam, as it could have served as a springboard for him to run for president.

While the presidential office made contact with Kim Young-sam, it didn’t inform me. But I felt a change in the atmosphere.

During a meeting with Roh on July 10, 1989, our merger was reaffirmed. After the meeting, I told reporters the time had come for the two political forces to unite. Some people in the governing Democratic Justice Party openly objected to the merger.

In October 1989, I went on a series of golf outings with Kim Young-sam, not knowing that Kim and Roh were also in talks to merge their parties. Kim and I talked a lot about a lot of things. But neither of us mentioned the word merger.

In January 1990, the Blue House called me in for a one-on-one meeting with President Roh, which we did on Jan. 13. From that point on, work was accelerated on the merger between my party and Roh’s governing party. On Jan. 20, we issued a joint statement declaring the merger, saying the two parties had agreed to combine for the sake of the country with the new name Democratic Freedom Party. The political landscape was being shaken up.