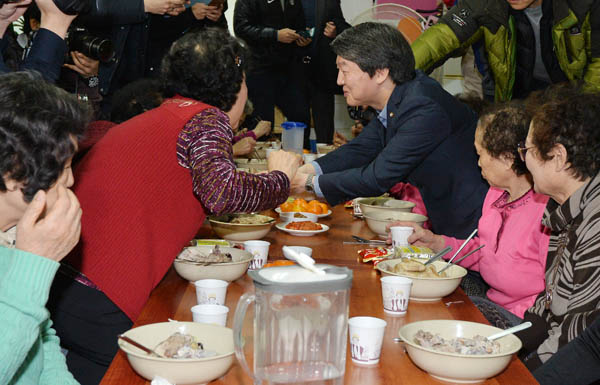 Ahn Cheol-soo, former co-chairman of the New Politics Alliance for Democracy (NPAD), visits a senior center in Nowon Ward, his electoral district in northern Seoul, as his first official order of business on Monday, just one day after he declared his defection from the NPAD. [NEWSIS]

Korea’s main opposition party scrambled to come up with solutions on Monday, with more lawmakers expected to defect in step with Rep. Ahn Cheol-soo, the party’s former co-chairman who announced his departure on Sunday.

The New Politics Alliance for Democracy (NPAD) called an urgent general meeting Monday as political turmoil between the supporters of the party’s incumbent Chairman Moon Jae-in and those critical of his leadership came to a head.

Moon’s critics demanded he step down to take the responsibility for the NPAD’s worsening rifts and urged the party to form an emergency committee, while his loyalists remained firm on maintaining his position, vowing to unite under his leadership to overcome the challenges ahead of next year’s general election.

Ahn’s departure came after negotiations with Moon over electing a new leader failed.

Korea’s main opposition party has been grappling with plummeting popularity for months since its defeat in parliamentary by-elections last April.

Ahn’s departure signaled a looming shift in the political landscape, and several NPAD lawmakers have already expressed a willingness to follow him.

The defection of Moon Byung-ho, Ahn’s former chief of staff, is expected to set off a domino effect. The opposition lawmaker previously said that he would announce his departure sometime this week, along with other members of the party. Reps. Hwang Ju-hong and You Sung-yop also expressed their support for Ahn.

“Surely we will create a new party to win in the general election,” Moon said at a radio interview, predicting that more than 20 lawmakers would be likely to join the migration by year’s end.

However, he was uncertain whether lawmakers representing the capital region and first-time legislators would follow through with such a bold choice. “It’s just a matter of time,” Moon said, before Ahn forms an alliance with Chun Jung-bae, a five-term liberal lawmaker who plans to create a new political party by January.

On Monday, the success of Ahn’s plans was hard to gauge, with political veterans refusing to definitively speak on the issue.

Park Young-sun, a former NPAD floor leader, said Monday she was “composing her thoughts,” when asked about the possibility that she may cooperate with Ahn.

Park served as the last-minute mediator Sunday morning, persuading Ahn and Moon Jae-in to briefly speak over the phone.

Kim Han-gill, who co-chaired the NPAD with Ahn, said the turmoil within the party was “deeply concerning,” but declined to elaborate further.

Ahn kicked off his official schedule on Monday vowing to do all he could to improve public welfare and change politics.

“Apple founder Steve Jobs was also kicked out of his firm by John Sculley. After that, the outcome all depended on Steve,” Ahn told the press Monday morning after visiting Nowon Ward in northern Seoul, his constituency, adding that he would run in the district next April.

The Korean software mogul and philanthropist entered politics in 2012 to run in the presidential election but eventually dropped out of the campaign to throw his support behind Moon Jae-in, the opposition candidate, who ended up narrowly losing to Park Geun-hye.

Ahn went on to found the NPAD in March 2014 alongside Democratic Party leader Kim Han-gill. However, the two stepped down as co-chairman in July 2014 following the NPAD’s embarrassing defeats in by-elections.

He quickly arranged his schedule to begin gathering supporters and will start meeting people in Busan today and Gwangju on Thursday.

Moon Jae-in also headed to Busan on Monday for an unofficial two-day trip but declined to comment on politics.

The ruling Saenuri Party also blamed the NPAD for obstructing the passage of five crucial economic bills, declaring the National Assembly “in a state of emergency.”

The Saenuri floor leader and a group of 10 lawmakers visited Assembly Speaker Chung Ui-hwa and urged him to submit major bills to a vote, including a package of labor reforms and economic bills, using his authority at a plenary session for today. Chung, however, rejected the suggestion.