On the street where cartoon characters live

On the street where cartoon characters live 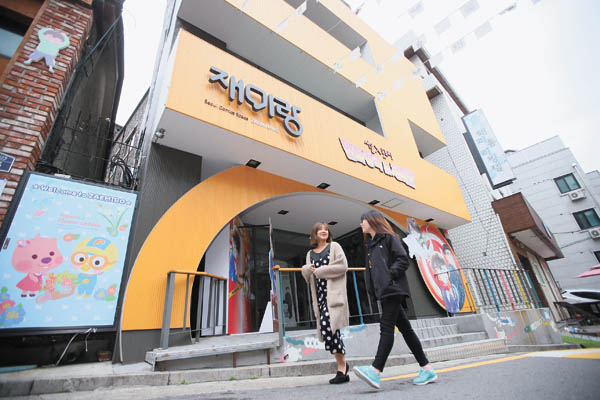 The Jaemirang Comic Museum on Jaemiro in Myeong-dong, central Seoul, has exhibition rooms and an attic full of comic books. [JUNG DISTRICT OFFICE]

Although Seoul is filled with skyscrapers, small alleys also dictate the landscape of the city.

One of the most playful is Jaemiro in Myeong-dong, central Seoul, a 450-meter (0.28-mile) street that runs from exit 3 of Myeong-dong Station to the Seoul Animation Center. Visitors can see diverse cartoon drawings and posters on its walls.

“I like this place much more than riding on the Mount Namsan cable car,” said Hwang Jae-woong, a 6-year-old who was playing around a bus stop in Myeong-dong where Tayo the Little Bus, a character in a Korean computer-animated television series, stops.

Jaemiro has had a surge in popularity after tourists and families visiting nearby Mount Namsan have posted photos and videos on social media. 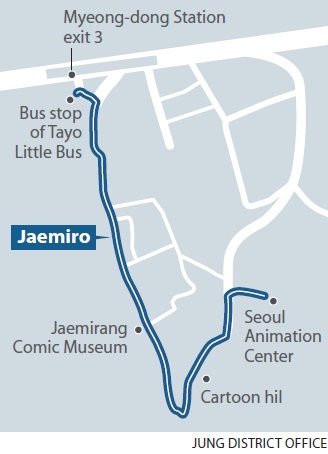 One 6-year-old boy ran around freely waiting for the popular Tayo bus from the animated children’s show “Tayo the Little Bus.” His mother was busy taking photos of him.

In the past, this uphill street was rather neglected. Under Japanese colonial rule (1910-1945), it was the headquarters of the Governor General of Korea until 1926.

The Korean Central Intelligence Agency was founded next to the street in 1961. A building that now houses the Seoul Animation Center, founded in 1999, is said to have been used as an interrogation center by the agency.

The street was considered a gloomy place by many Seoulites until in 2013, when the Jaemiro construction project took place, and it became a new center of Korean cartoons. In every available place, from corners of buildings to stairs, cute sculptures and murals form unique urban landscapes that greet visitors.

The highlight of the street is the “cartoon hill” located at its end.

At night, popular characters created by the Korean cartoon industry over the past 40 years such as Robot Zzibba and Run Hany are illuminated on the hill.

Unique shops selling merchandise related to the characters also attract people. Dong Bang Hong, a Chinese restaurant, put stickers of the Three Kingdoms cartoon, based on the history of the late Eastern Han dynasty (184-220) and the Three Kingdoms period, on its windows.

“Many Chinese tourists take photos with one of the cartoon’s characters,” Wang Hyo-rye, 62, a cook at the restaurant, said.

“I’m going to put three different garnishes on noodles as a new menu item next year, which will be named ‘Three Kingdoms Jajangmyeon.’”

Park Myeong-sook, 41, who has run Miga Hair Shop for 13 years, decorated her shop with characters from the animation series “Hello Jadoo.”

Cartoon fans are recommended to visit Jaemirang, a cartoon museum. In the attic of the museum, about 1,800 old and new comic books are displayed that people can read for free.

The Seoul Metropolitan Government is planning to develop areas around Mount Namsan and Jaemiro into a cartoon industry center to attract many Chinese tourists.

But illegal flyers, a garbage problem and a lack of parking space are problems in the area.

“We replaced some 80 old shop signs in October in order to smarten up the area,” Choi Chang-sik, head of the Jung District Office, said. “We also plan to make a public parking lot near Samil-ro.”