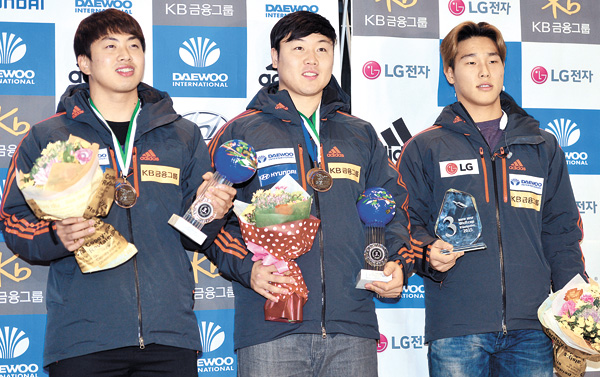 From left: Won Yun-jong, Seo Young-woo and Yun Sung-bin pose for a photo at Incheon International Airport on Tuesday. In the World Cup series, Yun finished third in skeleton, while Won and Seo won bronze in two-man bobsled. [NEWSIS]

Yun Sung-bin may be destined to compete in the skeleton.

Just three years since he first competed in the fast winter sliding sport, he now stands shoulder to shoulder with the world’s top-class skeleton racers and is eyeing the 2018 Pyeongchang Winter Games.

Yun returned to his homeland on Tuesday with a bronze medal after competing at the International Bobsleigh & Skeleton Federation World Cup event in Konigssee, Germany, over the weekend.

This was Yun’s first medal this season. He finished fourth in the season’s second World Cup event in Altenburg, Germany, on Dec. 5.

“I’m happy that I got good results as I kept racing in the event,” Yun said on Tuesday.

Yun’s progression in the skeleton event is exceptional. Currently, the world No. 1 is 31-year-old Dukurs, who has been overall World Cup series champion for six straight seasons, and also holds three World Championship titles and two silver medals from the Winter Games. His older brother Tomass, 34, is also a top-class skeleton racer, finishing third in the Worlds this March.

Both have raced skeleton since 1998 and are coached by their father Dainis, who was a former bobsleigh brakeman and sled designer. It took 10 years for the Latvian brothers to become top-class skeleton racers. But for Yun, it only took three years.

Yun’s fast progression may be due to his parents’ sports DNA. His father was a volleyball player, and his mother was a table tennis player. However, he was an outsider at the winter sport, as he had never even been on a pair of skis.

Until July 2012, Yun, who was born in Namhae, South Gyeongsang, was a normal high school student who hoped to continue his athletic career in college, but after getting involved in skeleton, his life changed.

Skeleton is a speed event where the athlete lies face down on a small sled with a length between 31.5 inches and 47.2 inches.

Racers can reach a speed in excess of 140 kilometers per hour (90 miles per hour), as they hurtle down a steep frozen slope, steering the sled only by using torque and body movement.

Yun, who now attends Korea National Sport University, began skeleton when he was a senior at high school. To increase his power, he ate eight meals a day. The 1.78-meter (5-foot-10) racer now weighs about 88 kilograms (194 pounds), up from 75 kilograms.

As his weight improves, so does his performance. In November 2013, Yun collected his first medals in the America Cup series, with one silver and two bronze. In the 2014 Sochi Winter Games, he finished 16th.

Yun has been trying to upgrade his start by working with foreign coaching staffs. At the second race in Konigssee, his start was 4.59 seconds, 0.04 seconds faster than the winner, Martins Dukurs.

When the sliding center track for the Pyeongchang Winter Games is completed in February, Yun and the Korean national skeleton team are planning to ride the track more than 500 times until the Winter Games kick off.

“I will practice as much as I can so that I can ride the track even with my eyes closed,” Yun said.