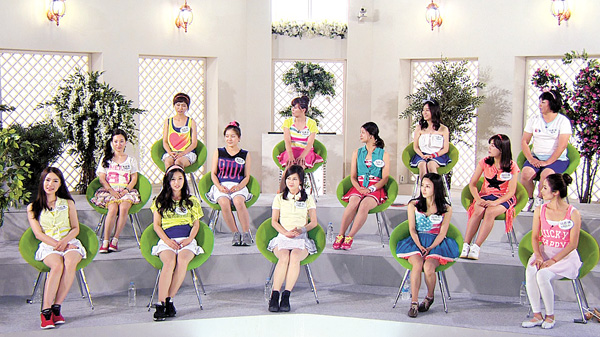 North Korean defectors get ready to shoot the popular TV show “Now on My Way to Meet You,” a talk show in which defectors discuss various topics from their beauty secrets to the quirky tastes of North Korean leaders. Unlike in the past, many TV shows these days feature people from the North. [CHANNEL A]

North Korean defector-turned-filmmaker Jung Sung-san still remembers how the South Korean media portrayed his compatriots when he settled here back in 1996.
“Only one TV show dealt with North Korea back then. It was a serious news show. And people living up in the North were often described as people who have horns or public enemies,” said Jung, who still has a North Korean accent, though he frequently and naturally uses English words such as “contents” when he spoke to the Korea JoongAng Daily.
“I felt like we North Korean defectors were oil floating on water,” Jung added.
Looking at the slew of TV shows featuring North Korean defectors these days, however, Jung feels a lot has changed over the past two decades.
As the number of TV channels in Korea increased to more than 100 over the past 20 years and the number of TV programs exploded, North Korean defectors have become “rising stars,” as the French daily newspaper Liberation noted in 2012.
“I’ve never seen the [South Korean] media have this much North Korea-related content before,” Jung added.
Indeed, North Korean defectors used to appear only in news or documentary programs until four new channels - JTBC, MBN, Channel A and TV Chosun - were launched in 2011.
These latecomers needed something provocative to catch the attention of viewers to compete with the major terrestrial channels - KBS, MBC and SBS - and well-established cable channels.
And one of the topics they landed on was North Korean defectors.
That same year, Channel A launched the talk show “Now on My Way to Meet You,” featuring beautiful female defectors in their early 20s, and the new concept made the show an instant hit.
Prompted by the huge success of the talk show, in which up to 10 women share tidbits of life in the North, from the quirky tastes of North Korean leaders to the tragic stories of their escape, other channels began to launch similar shows. Through such TV programs, South Korean viewers saw the softer side of North Korea beyond missile launches and politics, but critics say the shows deliver false information and play on stereotypes about North Korea and defectors. 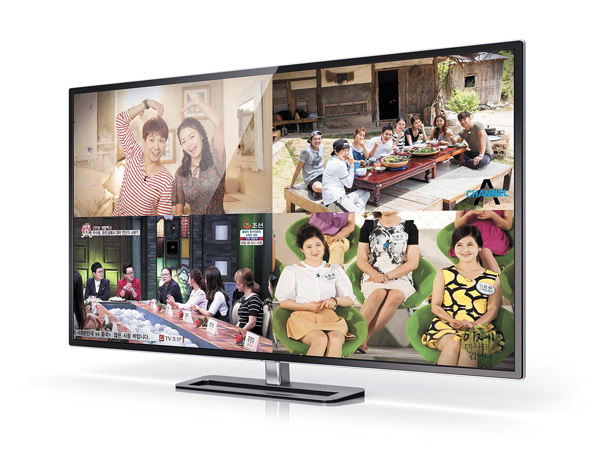 With an increasing number of North Koreans living in the South, many TV shows feature defectors, mostly women in their 20s. The shows include, clockwise from top left: “Love Reunification: Namnam Bungnyeo,” “Jalsalahbose,” “Now on My Way to Meet You” and “Moranbong Club.” [SCREEN CAPTURE]

In addition to “Now on My Way to Meet You,” there are a couple other shows featuring primarily North Korean defectors.

One such show, TV Chosun’s “Love Reunification: Namnam Bungnyeo,” pairs up male South Korean celebrities in their late 30s and early 40s with female North Korean defectors in their early 20s. On the show, the couples experience what it would be like if they were married.

Another show, Channel A’s “Jalsalahbose,” which roughly translates to “let’s live a good life,” features a group of South Korean celebrities and North Korean defectors who spend time together in a rural village fending for themselves.

There is another talk show, too. “Moranbong Club” on TV Chosun features female North Korean defectors who discuss a wide variety of topics with the South Korean hosts.

The topics vary each week from the beauty secrets of North Korean women to what North Korean defectors think of South Korean men who don’t want to help out with chores on the weekend.

Moranbong is the name of a peak located near the Taedong River in North Korea.

Besides these shows focusing solely on North Korean defectors, there are a number of programs that include defectors as regular guests.

For example, one TV Chosun program features a North Korean defector who used to work as a family doctor to the late North Korean leader Kim Il Sung. On the show, she reveals the health secrets of the former leader.

Ko defected to the United States 17 years ago with her husband, Ri Gang, and Ri recently visited Seoul to file the lawsuit.

Similarly, those who are against the defector-centric TV shows say that much of the information from defectors is incorrect or has been exaggerated to improve the entertainment value.

“I’ve never heard of a North Korean defector who likes ‘Now on My Way to Meet You’,” Ahn Chan-il, head of the World Institute for North Korea Studies, said.

Ahn, a former North Korean military officer, defected to the South in 1979.

“People on the show talk about North Korea differently, and they try to make their stories more sensational, and that’s what the TV show also wants from its guests,” Ahn added. He has appeared on “Now on My Way to Meet You” several times as a male guest.

Lee Woo-young, a professor at the University of North Korean Studies in Seoul, says the information from North Korean defectors can’t be trusted. His main area of study is the culture and journalism of North Korea.

“Many of the young North Korean defectors left home when they were 5 or 6 with their families. And the older generation escaped North Korea 20 or 30 years ago. What do they know about North Korea?” he said.

But a more serious problem with the shows is their sexualization of young North Korean women, according to Lee.

All of the aforementioned programs feature beautiful young defectors in their 20s.

“The shows are irresponsible,” Lee said. “They make biased people even more biased. If you go outside Seoul, you can see a lot of advertising banners that encourage Korean men to marry pure North Korean women.”

“Pure” means virgin in the context of such banners, which are put up by matchmaking companies that specialize in setting up female North Korean defectors with South Korean men.

There is a long-held stereotype that women from the North are more innocent and devoted than their counterparts in the South, and the South Korean media only furthers that belief. On TV shows, the female defectors are usually described as shy and passive.

The TV monitoring department of Womenlink, a local civic group, released a report last November based on one month’s worth of episodes of “Now on My Way to Meet You” and “Love Reunification.”

According to the report, “[The shows] tend to show fixed images of North Korean women instead of showing what kind of people they are. They only focus on the purity and femininity of the women.”

Other TV shows seek to highlight the stark differences between the two Koreas.

On a recent episode of “Jalsalahbose,” the show allocated much of its airtime to the quirky tastes of North Korean defectors.

On the show, North Korean defectors went grocery shopping with a South Korean actor. The North Korean women said they used to eat pig tails and pig noses when they lived in China, and they visited a Chinese market in Yeongdeungpo District, southwestern Seoul, to find these foods, which are comparatively rare in South Korea.

Not everyone is critical of TV shows that heavily feature North Korean defectors, though.

Kim Myung-hun, a professor of mass communications at Sogang University in Seoul, sees the programs from a different perspective.

“South Korean TV shows hardly deal with North Korea unless mines explode near the demilitarized zone,” he said. “In addition, North Korea is a place you can’t actually reach, but North Korean defectors can give us information even if it is just tiny details.

“Before, information about North Korea was only available in the realm of experts, but now, the information is available to the public through the shows.”

But Kim added that the shows will not last long if they focus too much on entertainment.

Ahn from the World Institute for North Korea Studies said the programs are a double-edged sword.

“The shows have pros and cons, but they will be helpful for reunification eventually because they give us a chance to see North Korean defectors and make it possible for us to hear their stories.”

Filmmaker Jung said he understands the complaints about shows like “Now on My Way to Meet You” because he often appears on these shows, but he said he doesn’t want to criticize them.

“I think the shows draw a sharp line between ordinary North Koreans and the dictator regime,” he said. “By watching TV shows, South Koreans realize the upper part of the nation is a place where ordinary people live.”

About 28,000 North Koreans in total have defected to South Korea, according to the Ministry of Unification.

With a growing population of North Korean defectors, not all the shows approach defectors in such sensationalized ways.

On the reality TV show, in which seven teams from all different parts of the country compete with each other, the North Korean team delights viewers by presenting unique delicacies from the North.

The third season of the show, which aired in May, also had a North Korean team consisting of two skilled cooks.

Through the show, which means “good friends,” teenagers from the South and North get to know each other by discussing various topics.

For instance, they learn the differences between songpyeon (half-moon-shaped rice cake) from the South and North before the Chuseok holiday.

The South Korean teens say they liked the North-style songpyeon better because it is a lot bigger and the rice cake is stuffed with vegetables and glass noodles, which are more like side dishes, while the South’s version is smaller and sweeter.

The tone of the show is neutral, and neither of the two Koreas is portrayed as superior or inferior.

“The main concept of the show was to let two groups of teenagers get to know each other,” said Kim Min-ji, who works at the education and development department of the Institute for Unification Education. The institute sponsors the production of the program.

“So we wanted them to experience the day of reunification in advance in their classrooms.”