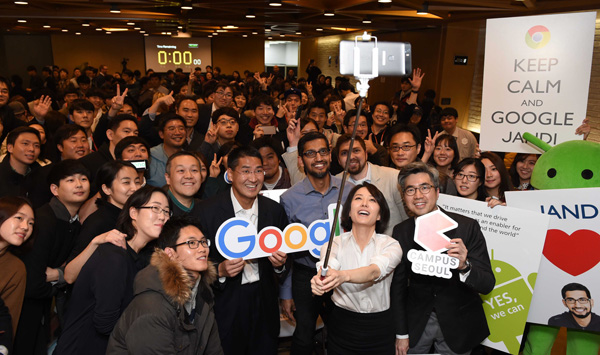 Google plans to focus and invest more in machine learning and artificial intelligence, the CEO of the Internet behemoth said in Seoul.

“Our core mission is to organize the world’s information, and we take it very seriously,” Sundar Pichai said in a 40-minute talk in front of entrepreneurs and the media at the Google Campus Seoul in southern Seoul on Tuesday. “There’s a lot more of it in the context of mobile.”

He said that people now have probably 20 times the number of photos taken with mobile phones compared to 10 years ago, and machine learning and artificial intelligence will be the solution to organizing and systemizing the content.

Pichai said that although voice recognition and image recognition technologies are in their infancy, there has been phenomenal progress in the past two to three years. Eventually, they will apply to “many, many things” that Google is involved in, such as object detection for autonomous self-driving cars and health care.

The former product chief at Google who was in charge of crucial projects including Chrome, Google Drive, Maps and Android, was named Google CEO in August, becoming the most powerful figure at the tech giant after co-founders Larry Page and Sergey Brin.

Born in India, Pichai earned a metallurgical engineering degree from the Indian Institute of Technology Kharagpur and went to the United States to pursue a master’s degree in material sciences and engineering at Stanford University and an MBA from the Wharton School of the University of Pennsylvania.

After experiences at Applied Materials and McKinsey & Company, he joined Google in 2004 and has risen quickly through the ranks ever since.

Over time, Google has shifted its focus from being a search engine to offering mobile-based services such as YouTube and Android, and now to developing machine learning and artificial intelligence. Machine learning explores the study and construction of algorithms that can learn from and make predictions on data, while artificial intelligence involves creating computers and computer software that is capable of intelligent behavior.

Pichai, 43, last visited Seoul in August last year when Google Korea announced the establishment of the Google Campus in Seoul. Asked about his new role as CEO, he said, “It’s been exciting and busy.”

Offering M&A advice for large Korean tech companies, Pichai said acquiring start-ups could be one answer to bringing in entrepreneurial people with new ways of thinking, largely because the world is changing so fast.

He said even if fledgling entrepreneurs in Seoul don’t achieve their goal, it’s a step toward doing the right thing and the outcome doesn’t matter. “The journey matters more than the outcome.”

He urged entrepreneurs to “do something [they] are passionate about,” and recommended they work with people they feel are smarter than they are, which is how they will grow.