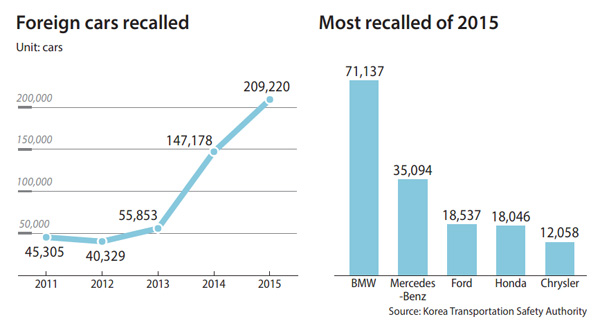 Looking back at the year, there are two ways foreign automakers can be evaluated: their sales, but also the number of cars recalled.

Both are expected to break annual records.

According to data released by the Korea Automobile Importers and Distributors Association (Kaida) earlier this month, the total sales for this year by foreign automakers including BMW, Mercedes-Benz Korea, Audi and Volkswagen are expected to be around 235,000 units, which would be a 19.6 percent rise from last year’s 196,359. It will also be the first time more than 200,000 imported cars have been sold in Korea in a single year.

But the question is whether foreign automakers can continue the success, which will largely depend on their product quality management and after-sales service - two areas of complaint among local consumers lately.

More troubling, that figure doesn’t include the 125,522 Volkswagens and Audis that will likely be recalled in early January due to the emissions rigging scandal.

“One reason for the increasing recalls is tightened regulations on defect inspections, which became a global trend, including in Korea,” said a spokesman of the KTSA.

“Of the recalled cars, about 50,000 were just the 5 Series sedan, but considering that the headquarters in Germany voluntarily decided the recall for potential problems, we don’t think there are problems on our overall quality,” a spokesman of BMW Korea told the Korea JoongAng Daily.

The Transport Ministry announced the recall in September, citing certain defects that could stop the engine while a vehicle was in motion.

But BMW continued to take heat over the past few months due to quality issues.

Since October, seven BMWs have inexplicably caught fire while being driven. On Monday, a 750 Li sedan had its engine burst into flames while in motion on the Yeongdong Expressway near Icheon, Gyeonggi, forcing the owner to park the vehicle on a side road and escape.

Mercedes Benz had similarly dramatic problems, with the owner of a S63 AMG sedan in Gwangju destroying his own vehicle in September in protest of the company’s poor after sales service.

The Transport Ministry later decided to recall 721 of the sedans for a possible engine malfunction.

“In the past, Korean consumers trusted the quality of foreign automakers, but with the news lately, people have started seeing them differently,” said Kim Ki-chan, a business professor at Catholic University. “They certainly need to provide better after-sales
and product quality management
systems.”