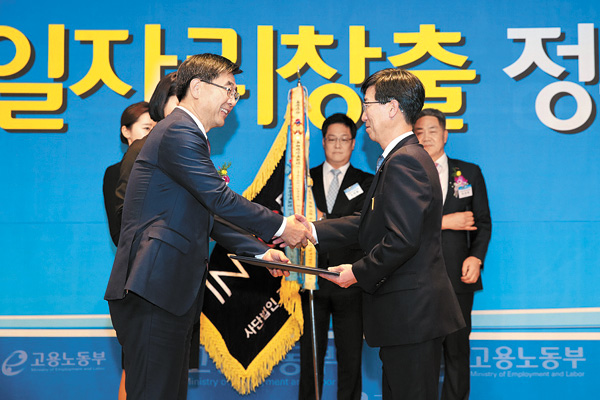 Five key business lobby groups vowed on Tuesday to tackle the low birth issue that has dogged the economy, with measures such as improving job positions for younger workers and shortening hours for working mothers.

“The fundamental problems with low birth and an aging society lie in joblessness among youngsters. The reason they are having difficult times now is because the labor market isn’t flexible enough,” Park Byoung-won, chairman of the Korea Employers Federation, said in a speech at the Press Center in central Seoul.

“The business community will make efforts to spread family-friendly corporate culture by raising the number of jobs for youth to boost marriage and the birthrate, and by improving the working culture.”

He added that marriage and low fertility is no longer confined to individuals but has become a national task to be jointly resolved by the government and companies.

The collective move came after the government unveiled a third series of plans to cope with low birth and aging population issues last Thursday.

Urging passage of labor reform-related bills at the National Assembly, President Park Geun-hye said that late marriages and low birth is attributable to the hardship of finding proper jobs.

Korea has one of the lowest birthrates among the Organization for Economic Cooperation and Development members. The fertility rate - the average number of children a woman can potentially have - has stayed below 1.3 since 2001, according to Statistics Korea.

The portion of people aged 65 or older has also been constantly increasing. Last year, the percentage of seniors in the total population registered 12.7 percent, and the number is expected to surpass 14 percent by 2018, according to the agency.

“Campaigns to encourage giving birth to children and ease private education burdens should be launched,” Huh Chang-soo, chairman of the Federation of Korean Industries (FKI), said.

“That will add force to the government plans that include expanding jobs, providing cheaper housing and building more child care facilities.”

The five groups representing local conglomerates and other private enterprises are the FKI, the Korean Chamber of Commerce & Industries, the Korea Employers Federation, the Korea Federation of SMEs and the Korea International Trade Association. The ministers of finance, welfare and gender equality also attended the event.