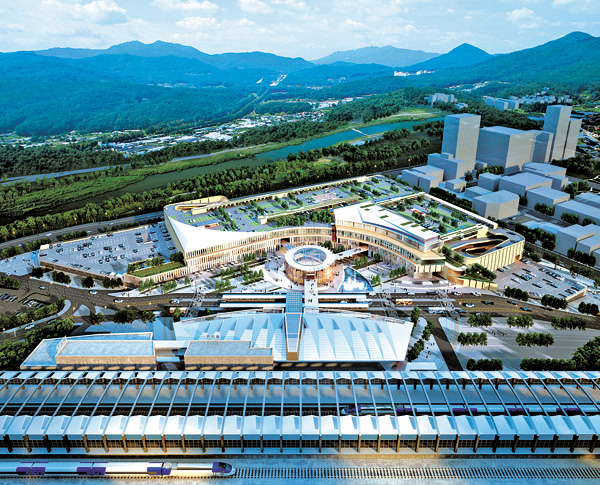 Lotte Shopping plans to build a large 75,395-square-meter (811,545-square-foot) shopping complex connected to Ulsan Station to tap into the population of the prosperous industrial city.

The company said on Tuesday that it has signed a memorandum of understanding with the Ulsan city government to build the complex by 2018.

Lotte Shopping submitted a business proposal to build on the area surrounding Ulsan Station, in South Gyeongsang, in June.

The plan includes moving walkways, parking lots and other facilities that link the railway station with the shopping complex, as well as a shopping mall, movie theater and kids’ theme park. It will have one basement level and four floors with a total floor area of 180,468 square meters.

Ulsan’s population has scored the highest in terms of personal income, according to the Ministry of Employment and Labor. However, there is less competition compared to big cities such as Seoul and Busan. Ulsan presently has only one Lotte Department Store and two Hyundai Department Store branches.

The company said it will contribute to the local economy while carrying out the project. The western part of Ulsan, where the station is located, is considered a less developed part of the city.

“While Lotte carries out the project, we will pursue joint construction projects and build a separate branch unit in the city,” said Noh Yoon-cheol, director of the new business division at Lotte Department Store, which belongs to Lotte Shopping.