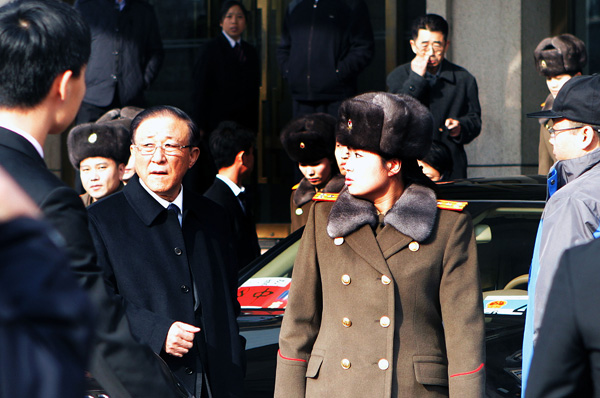 Ji Jae-ryong, left, North Korean ambassador to China, and Hyon Song-wol, right, the leader of the Moranbong Band, walk out of the Minzu Hotel in Beijing after the concert was canceled on Saturday. [JOONGANG PHOTO]

The mysterious cancellation of a Beijing concert by North Korea’s Moranbong Band on Saturday appears to be linked with the girl group’s program, which included adulations of leader Kim Jong-un and possibly boasts about the country’s nuclear tests, which China’s government was against.

The Moranbong Band, whose members were allegedly handpicked by Kim, was scheduled to perform with North Korea’s military band, the State Merited Chorus, at Beijing’s National Center for the Performing Arts on Saturday evening. The band withdrew hours before the invitation-only concert began, pulling the plug on a goodwill tour that was supposed to go on for three days and symbolize improving bilateral ties.

Joo Ho-young, a three-term lawmaker of the ruling Saenuri Party who heads the parliamentary Intelligence Committee, received a report on the circumstances from the NIS over phone on Monday.

So far, Chinese state-run media has only said the concert was canceled because of “communication issues.”

According to intelligence officials in Seoul, Beijing apparently objected to the glorification of Kim Jong-un seen at the rehearsal.

The titles of some of the songs on the Moranbong program can be roughly translated to, “Let Us Never Abandon Our Revolutionary Beliefs Even If We Die,” and “We Are Not Scared of Anyone.” Some analysts in South Korea said the songs could have had lyrics that boasted about North Korea’s nuclear tests and its plans to launch long-range missiles, which would not sit well with Beijing officials.

The NIS report to Rep. Joo indicates that Pyongyang and Beijing did not exchange detailed reports on the program before the rehearsal.

North Korea apparently refused to adjust its program, and in response, China was seen to have lowered the rank of the officials attending the performance. Initially, top-ranking officials were supposed to be in the audience. This likely upset North Korea, and the Moranbong Band abruptly withdrew hours before the performance and flew back to Pyongyang.

“Kim Jong-un’s hydrogen bomb remark and other issues may have played a role,” according to a lawmaker on the Intelligence Committee, “but fundamentally, the NIS determined the main problem was the content of the program.”

The Moranbong rehearsal on Friday might have even featured video of missile and nuclear launches projected behind the girl group as they performed. It is unclear in what capacity the footage was shown. Beijing has consistently condemned North Korea’s nuclear tests.

A senior intelligence official told the JoongAng Ilbo, “Chinese authorities found out at the rehearsal on Dec. 11 that throughout the Moranbong Band’s performance, there were scenes of missile launches playing in the background, and it appears they requested that they be deleted.”

The official added that China had already been tense following Kim Jong-un’s remarks about the hydrogen bomb last week.

There was no excessive celebration of their leader or any video clips related to nuclear or missile launches, though there was a shot of the North Korean flag at the end. The background images showed flowers, scenic views of mountains and children. The North’s Propaganda and Agitation Department oversees the KCNA broadcast.

The broadcast could be interpreted as a gesture of protest by Pyongyang to Beijing, according to analysts in Seoul.

Hong Kong’s Information Centre for Human Rights and Democracy reported that the Chinese military has mobilized some 2,000 soldiers at its border with North Korea, including around the Yalu and Tumen Rivers. This measure came after the Saturday cancellation of the concert.

According to a source in Dandong, Liaoning Province, on Tuesday, “After the cancellation of the Moranbong Band’s performance, restaurant employees in areas around the Tumen River facing North Korea’s Sinuiju have been behaving brusquely to Chinese customers and are extremely guarded.”