Poll shows Saenuri on top as opposition continues to reel

Poll shows Saenuri on top as opposition continues to reel 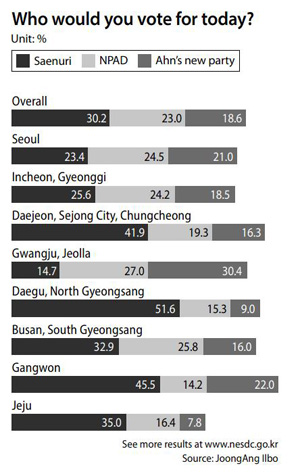 The defection on Sunday of former opposition leader Ahn Cheol-soo from the New Politics Alliance for Democracy (NPAD) could be a windfall for the ruling Saenuri Party, according to a JoongAng Ilbo survey conducted after his departure.

The survey on Monday of 800 adults nationwide showed that more than half of respondents supported Ahn’s decision to leave the NPAD. Fifty-four percent agreed with his move, while 29 percent answered against it.

Regarding who was responsible for the rift in the NPAD, 44 percent said it remained with incumbent NPAD Chairman Moon Jae-in, while 12 percent blamed Ahn.

Nearly a third of respondents, or 30 percent, said they would support the Saenuri Party if the general election was held now. The NPAD and Ahn’s newly pledged political party trailed behind, with 23 percent and 19 percent, respectively, in an indication that there could be fierce competition between the two groups in the future.

Among NPAD supporters, however, the results were reversed, showing that the backlash against the former co-chairman’s defection was deeper than that expressed by general opinion. Fifty-four percent of the liberal voters polled blamed Ahn’s move as a bad decision, while 24 percent claimed Ahn was responsible for triggering a split in the party.

The survey was conducted over telephone interviews with 800 voters nationwide on Monday. The confidence level was 95 percent, with a margin of error of plus or minus 3.5 percentage points.

“The … results show that there are two prevailing opinions among the liberal voters. One is hope that the party can be renovated, and the other is worry that the party will face defeat in the general election and the next presidential election as a consequence of the NPAD splitting in two,” said Yoon Hee-woong, a senior analyst at Opinionlive, a political survey institute based in Seoul.

On Tuesday, internal turmoil continued to deepen as NPAD lawmakers began to weigh their survival options ahead of next year’s general election.

“It seems we are in a wailing mourner’s house,” said NPAD Rep. Hong Young-pyo, one of Moon’s loyalists. “We still have to integrate the opposition. It is a verified fact that we will perish together unless we join hands.”

“Considering the low turnout among liberal voters, the actual results of the general election may be more tragic,” added Jung Sung-ho, a second-term lawmaker outside Moon’s group of supporters.

According to the JoongAng Ilbo survey, the Saenuri Party was leading in all areas except Seoul and the Jeolla region.

Kim Han-gill, who co-chaired the NPAD with Ahn in 2014, said in his latest Facebook post that an alliance of the opposition powers was the answer to overcoming the current challenges.

However, NPAD Rep. Min Byung-doo said he could not see any possibility of cooperating with Ahn.

As of Tuesday, no lawmakers had followed in Ahn’s footsteps.

NPAD Rep. Moon Byung-ho, Ahn’s former chief of staff, announced earlier that he would depart from the party sometime this week along with Reps. Hwang Ju-hong and You Sung-yop. However, the three have hesitated to give a fixed date for their departure as they weigh the opinions of their supporters.

Moon Byung-ho previously estimated that more than 20 legislators were likely to defect from the main opposition by the year’s end, while loyalists to Chairman Moon estimated that figure to be anywhere from five to 10.