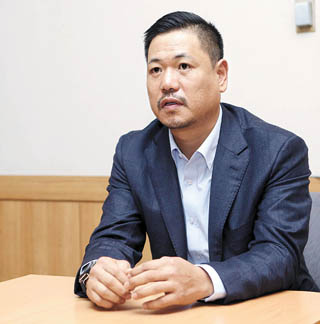 The Twins announced on Dec. 3 that Lee will be the chief of their Pitching Academy, a center to foster young pitchers. This will be the first time since 2004 that the former lefty ace will be back with the Twins. He retired from playing in 2004 after he was traded to the SK Wyverns.

The Twins hope Lee can inject his experience and skills into young players. The 44-year-old not only played in the Korea Baseball Organization (KBO) but also in Nippon Professional Baseball (NPB) and Major League Baseball (MLB).

After becoming the top closer in 1997 with 37 saves, Lee went to the Japanese club, the Chunichi Dragons, and then played for the Boston Red Sox in the MLB. He is one of only five Korean players who played in the KBO, NPB and MLB.

After returning to the KBO in 2002, he represented Korea in the Asian Games in Busan and collected 30 saves in 2003.

But because of friction between management and the manager, Lee was traded to the SK Wyverns and abruptly announced his retirement during the season.

After retirement, Lee, whose nickname is also “wild horse” because of his eccentric behavior, went on to form a rock band and ran a beauty salon. But he returned to the diamond as a pitching coach for the independent baseball club, the Goyang Wonders, in 2013 after a call from Kim Sung-keun, who is now the Hanwha Eagles manager.

This year, Lee returned to the KBO League, but he chose the Twins’ Seoul rival, the Doosan Bears. He was the minor league team coach for the Bears and saw the club win the Korean Series title.

In an interview last week with Ilgan Sports, an affiliate of the Korea JoongAng Daily, Lee emphasized that the mindset of young players is important to becoming better players. He also had advice for Korean players who are currently looking to play in the MLB next season.

Q. How do you feel about returning to the Twins?

A. The Twins are the team that I’ve spent most of my career with. My heart still moves when I see fans wearing my jersey. Anyone would like to work for a team that acknowledges his value. I’m just thankful and happy that they called me back.

What do you do as a chief of the Twins’ pitching academy?

I’m still learning what I should do. But the basic format is to help prospects enter the first team roster of the Twins. It’s not easy for those who shined in amateur baseball to do the same as a pro.

In the professional league, there are games for eight months and pitchers whose fastball exceeds 150 kilometers per hour (90 miles per hour) and might be tired and pick up an injury later. By overcoming the situation, pitchers get better in almost every aspect, such as the velocity of the ball and pitching combinations, as well as confidence. I will help pitchers become strong players.

What are the details on your plan?

If a player is able to enter the first team roster within three years, that player is really good. Currently, those who are in the professional teams have the right attitude and stance in order to be called a pro. They have very good self-management. In order to take a position from these players, a young player needs at least three years. Of course, it will be difficult for young players to take a regular spot from the strong team. My job is to help them grow and complete their tasks when these young players get their opportunities. I want to share my solutions to overcome a slump and difficulties.

How is your coaching experience going to work here?

When I was with the Wonders, I had to read the thoughts of manager Kim Sung-keun. One day, he ordered me to put up a pitcher even though he wasn’t ready.

After that incident, I had to prepare every pitcher that Kim might have wanted to play in the game. I needed to know everything. Kim gave me a good lesson. When I was with the Bears’ minor league team, I learned how to utilize players from starters to closers. I tried to give everyone motivation, from rookies to those about to play for the first team.

What can you say about players who now aim to play in the MLB?

When I first went to the U.S., I felt I was all alone, like being in the desert. When your surrounding environment changes, you get pressured and need time for adjustment. That’s when you need to keep positive thoughts. I think Ryu Hyun-jin’s positive mindset helped him have a successful debut season. For me, I was always under pressure that I needed to show something. I regret that. I hope young players perform as they did in Korea.

How does your experience in Japan and the United States help you in terms of a coaching job?

What I’ve learned from my overseas experience is that baseball is the same wherever you go. What’s important is your mindset. Whatever you learn in whichever league, you need to approach players with your own standard of baseball.

What’s your goal with the Twins?

I’ve never set my goals clearly. I just try my best daily. I want to teach players with sincere passion. Through my coaching days, I learned that passion exceeds money or honor. I was moved by my players’ attitude and their passion. I hope my thoughts and experience can help this team.