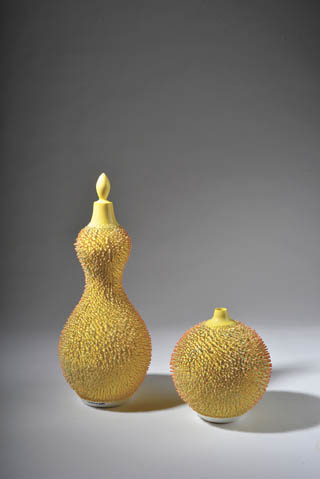 Ceramic artist Yun Ju-cheol combines 3-D printing technology and his so-called “cheomjang technique,” which involves decorating the exterior of ceramics with pointy spikes. His works, along with those by other artisans from Korean and abroad, are on display at the 2015 Craft Trend Fair from today at COEX in southern Seoul. [KOREA CRAFT AND FOUNDATION]

The rise of 3-D printing technology has opened new opportunities in diverse areas including the medical sector and the automotive industry, but at the same time it is seen as a threat to those whose jobs could be replaced.

But some craftsmen - who are among those who may be threatened by this new technology - decided to incorporate it into their work to create something completely new.

Some of these works will be exhibited at this year’s Craft Trend Fair, which kicks off today in Hall A of COEX in Gangnam District, southern Seoul, under the title “Future in Hands.” In time to mark the 10th anniversary of the event’s organizer, the Korea Craft and Design Foundation, this year’s craft fair aims to propose a new vision for the future of crafts and design.

Ceramic artist Yun Ju-cheol, who has been developing his own “cheomjang technique,” which involves adding pointy spikes to the exterior of ceramic works, uses a 3-D printer to make the base or other sections of his ceramic pieces.

“Craft is an art form of creating something new from the tip of your fingers,” Yun said. “I was shocked when I first found out that such handcraft could be substituted by technology like a 3-D printer.”

Although the artist felt threatened at first, he said he instead tried using the new technology to enhance his work instead of being scared of it.

“I wanted to prove that the same feeling of sensitivity that can be felt in a handcrafted item made by an artisan can’t be felt in a product printed using a 3-D printer,” Yun said, explaining why he decided to combine 3-D printing technology with his usual cheomjang technique.

He manages to prove that phenomenon through his works on display at the fair.

“With 3-D printers, it’s more advantageous to make repetitive patterns, create something that requires extreme precision or express diverse colors, as you can paint any colors onto the mold,” Yun said. “But the sensitivity that comes from the tip of an artisan’s fingers, printers can never replicate.”

But it’s not easy for artisans to quickly adopt 3-D printing technology like Yun, who has been learning about it for the past four years.

“It requires you to know how to handle the computer system for 3-D printers, and for craftsmen that’s a very difficult task,” he said, adding that most of the time they end up just giving up.

From left: Artist Yun Sang-hee’s lacquered accessory created in part using 3-D printing; a bowl by ceramic artist Bae Se-jin; and ceramic artist Shin Chul’s moon jar. These are among the works of 27 artists on display at the Main Exhibition. [KOREA CRAFT AND FOUNDATION]

Nine out of 27 artists participating in this year’s main exhibition, including Yun, are displaying works in which they’ve used 3-D printing technology.

Since 2013, artist Yun Sang-hee has also been merging traditional methods and high-tech 3-D printing to produce unique pieces. At the fair, she is exhibiting some accessories that have shapes reminiscent of Korean traditional items, but which were made using a 3-D printer and then lacquered to add traditional color.

Meanwhile, a ceramic artist Ahn Sung-man uses computer numerical control, which involves converting a design produced by a computer into instructions for a cutting machine to enable delicate cutting of ceramics. Ahn is also developing 3-D printers that are optimized for ceramics for use by ceramic artists, according to the organizers, with the hope that ceramics will coexist with digital technology in the future.

There are artists from abroad as well - such as Joachim Weinhold at the Institute for Mathematics of the Technische Universitat in Berlin - who are known for creating unique works using 3-D printers and scanners. According to the organizer, Weinhold will be exhibiting most of the pieces he has created using such technology at the fair, showing the extent to which 3-D printing technology can be used in the fields of crafts and design.

“I noticed that in Western countries, artists tend to fully adopt 3-D printing technology into their work if they choose to do so,” said Park Kyoung-rin, curator of the fair’s Main Exhibition. “But for Korean artists, they tend not to use it primarily but just use it for a part of their work.”

Park explained that the difference in ways of using 3-D printing technology allows one to make a clear distinction between Korean products and Western products.

“Visitors to the fair will see the clear difference between the works by Western artists and Korean artists,” she said. “They each have their own charm.”

Other sections of the fair include the International Exchanges section, where artists from four countries - England, France, Taiwan and Sweden - will exhibit their works. In the Gallery section, 16 galleries from Korea and four from abroad that specialize in crafts and design will be participating.

“In an attempt to spread the latest trends in global crafts and design, I carefully selected the most representative galleries abroad,” said Lee Won-ju, director of the Gallery LVS, who was in charge of inviting foreign galleries to the fair. “These foreign galleries showed special interest in young and talented Korean artisans, and I believe they are ready to introduce some of them back in their countries.”

The Craft Trend Fair, which runs until Sunday, is open from 11 a.m. to 7 p.m. today through Saturday, while on Sunday it closes at 6 p.m.

Docent tours, which take about 40 minutes, are available every day at noon, 2 p.m. and 4 p.m. and can be reserved at the entrance.