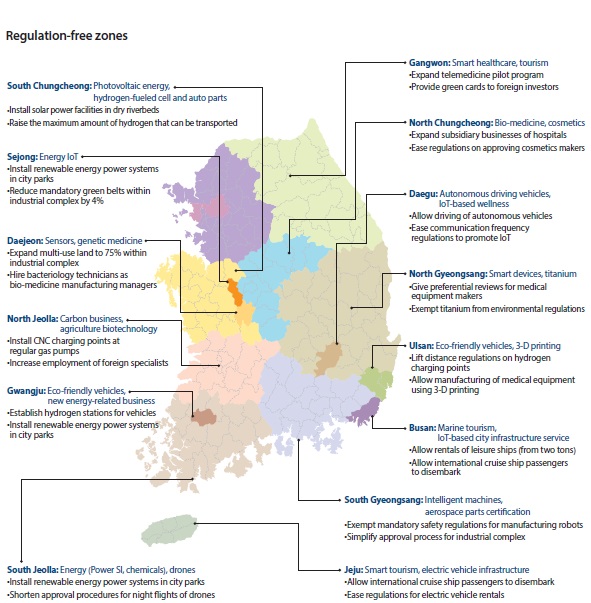 The government will establish “regulation-free zones,” or “free zones,” in 14 cities and provinces across the nation - except for the Seoul metropolitan area - to boost the regional economy and attract business investments.

As a major part of the economic policy direction for next year, the government has introduced deregulation areas to support the Park Geun-hye government’s creative economy initiative.

“The government has selected industries that are considered suitable for each region, and in the chosen regions, related regulations will be radically eliminated,” Jeong Eun-bo, deputy finance minister, said.

Two industries have been designated for each of the 14 areas. Sejong City is given one industry, considering its size and function. The regions and their key industries were confirmed by President Park Geun-hye at the Presidential Committee on Regional Development on Monday.

To make Busan an IoT city, the government will lift the regulation on communication frequency in a selected area where businesses are free to develop IoT-related devices and operate them on a trial basis. The specific area selected for the IoT business has not been confirmed.

For South Jeolla, the government will ease the restriction on testing drones, allowing developers to fly drones of any size at any time in the region. Drone makers will also receive government subsidies for research and development.

The government said it will review all rules and regulations that might hinder the growth of designated industries.

“Regulations that are difficult on a national level will be lifted in those particular areas for particular industries in order to help boost the regional economy,” said Lee Ho-seung, director general for policy coordination at the Ministry of Strategy and Finance.

The ministry is also planning to approve pilot telemedicine services in Gangwon and give preferential reviews of medical equipment development.

Next year, the government plans to introduce a special act to establish the free zones. However, it needs cooperation from lawmakers in both parties who are widely divided over passing pending bills related to the government’s economic reform plan.

“I strongly urge the lawmakers to do their job - passing the related bills - which is necessary to revitalize the economy,” Finance Minister Choi Kyung-hwan said.

The minister said the legislation process will also be crucial to address the youth unemployment problem.

“As for the five labor reform bills, I should say lawmakers must take responsibility for aggravating youth unemployment by holding back the passage of the bills,” he said.

However, the effectiveness of the free zone plan remains questionable.

The Finance Ministry does not yet have a concrete proposal to carry out the deregulation plan, and the impact on economic growth is also unknown.

“For the latest 15 years, the government has been suggesting new growth industries every five years, but none of them have been settled or grown as a major industry yet,” said Kim Sang-yoon, a research fellow at the Posco Research Institute.

“Rather than making unnecessary boundaries between regions by designating each region with a particular industry, it is important to integrate those new industries together and have a synergy effect in terms of efficiency.”

In some areas, the strategic industries also overlap. IoT is going to be promoted in Daegu, Sejong and Busan, and eco-friendly vehicles will be fostered in five different areas.

The government announced its plan to develop the northeastern part of the Seoul metropolitan area.

“The northeastern part is a backwater that falls short of living infrastructure due to the military and environmental regulations,” said Jung Byung-yoon, director general for land and city at the Ministry of Land, Infrastructure and Transport.

“To help the regional economy of that area, the government will see where to develop. But there isn’t a specific plan yet.”

About 100,000 hectares of land across the nation, previously restricted for farming, will also be deregulated. The areas will be used for constructing “New Stay” public rental apartments, units built by private construction companies, the ministry said.