The Solutions have it figured out

The Solutions have it figured out 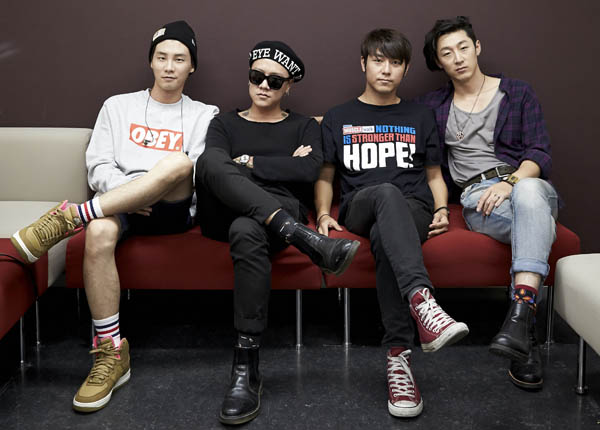 For rock group The Solutions, music has always been a fun game.

It’s also been a tool with which the members communicate with the world, an accessory that lets them stand out from the rest and something that ensures they’re living life to the fullest.

After all, music was the thing they wanted to do most and what they do best.

“But what if you aren’t sure if you will succeed? Should you still stake your life on it?” the JoongAng Ilbo asked the band in a recent interview. They replied that one should just do it, that it would be the most foolish thing to give up even before trying.

It was with that spirit that The Solutions began in 2012 with members Park Sol (vocals), Naru (guitar), Kwon Oh-kyung (bass) and Park Han-sol (drums). And since they formed a band, they have been quite busy.

Their major gigs have included a solo concert in Korea; the South by Southwest festival in Austin, Texas; as well as the Summer Sonic Festival in Japan. Last December, the band also played in six cities in five European countries.

It’s rare for such a young band to get such high-profile gigs, and the members admit that things haven’t been a piece of cake.

“The European tour, in particular, was tough,” Park Sol recalled. “We traveled by public transportation, carrying all the equipment ourselves. Some venues didn’t even have proper amplifiers. But I think the tour really helped the band grow.”

Park Han-sol agreed. “After the tour, I felt like I could do anything.”

And their hard work has paid off.

The Solutions got to work with Jimmy Douglass, the four-time Grammy Award-winning recording engineer and producer, on their second album, “Movements,” released last year.

The band also recently published a book, “Do it, Just Do It,” at the suggestion of a publishing company that had been following the band’s career with interest. The book gives a rundown on how each member became a musician. Park Sol, for instance, decided that music was his fate when he was in middle school and listening to a Nirvana CD. Naru’s story includes how he worked at a factory and lived in an inn to save money to buy a guitar.

“I decided I would pursue music because with music, I could truly be myself,” Naru said. “But I had to pay the price and went through a lot. I just wrote about that journey.”

But Kwon admits that there were times it was difficult to “just do it,” as the title of the book instructs. “I did have my share of hesitations and regrets. But if anybody has something that he or she wants to do but is hesitating, I’d like to advise to just try it.”

One of the answers that the members gave frequently throughout the interview was, “It just happened to be that way.” And that lack of explanation is frustrating. But listening to their story, perhaps it pretty much sums up their journey. They threw themselves into music, and it led them to where they are now. And their journey is still ongoing.

They wrapped up this year’s activities with a two-day concert, “V15ION,” in the Hongdae area of western Seoul. What’s in store for the band next year is anybody’s guess.