Reshuffles in North slowing down

Reshuffles in North slowing down 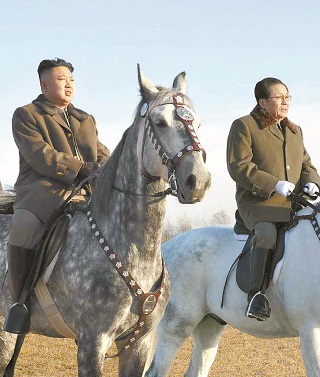 Kim Jong-un, left, rides a horse along with Jang Song-thaek, his original second-in-command, in November 2011. z[KCNA]

The military has gone through a greater upheaval than the ruling Workers’ Party or the government, the analysis shows. An average of 40 percent of senior military figures have been promoted or demoted every year since the death of the leader’s father, Kim Jong-il, in 2011.

A government official told the JoongAng Ilbo that a study of 94 positions in the ruling Workers’ Party and the government and 15 senior military positions - 109 in total - revealed that 79 of the positions have had a personnel change at least once in the past four years.

“High-ranking military figures such as the North’s defense minister have been subject to frequent reshuffles,” a government official said on the condition of anonymity given the sensitivity of the issue. 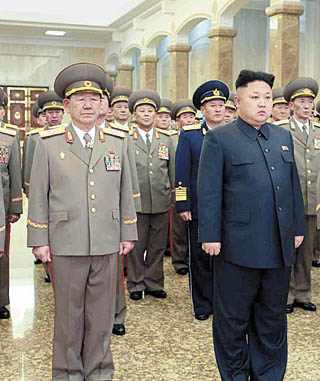 Hwang Pyong-so, left, stands next to Kim as second-in-command in 2015. [RODONG SINMUN]

An examination of 94 positions in the ruling party, the government and state-run groups showed that 67, or 71.3 percent, had seen personnel changes. Some of those 67 positions are the equivalent of ministerial positions, while others include the vice chairman of the North’s powerful National Defense Commission, which is chaired by Kim Jong-un, and secretaries of the Workers’ Party.

Over the four years, Pyongyang has gradually reduced the scale of reshuffles. In 2012, Kim replaced 36 senior positions, followed by 26 the next year. In 2014, the number was 21 positions, which went down to 18 so far this year.

The decrease in number of personnel changes is seen as a sign that the Kim Jong-un regime has succeeded in cementing its grip on its ruling elite.

“At the beginning, the Kim regime carried out a reign of terror supplemented by frequent dismissals and promotions of officials,” said Kim Yong-hyun, a professor of North Korean studies at Dongguk University. “The fact that there are fewer positions reshuffled indicates Kim has achieved some stability in his rule.”

At the center of the reshuffle has been the core leadership of the military, which is represented by 15 senior positions. Of the 15, which include the director of the political bureau of the North’s army, 12 have been replaced with new figures during Kim’s four years in power.

Choe Ryong-hae, once referred to as the right-hand man of Kim Jong-un as chief of the political bureau of the North Korean army, fell victim to the power struggle and lost his job earlier this year.

Choe vanished from public view in November and was sent to a rural agricultural cooperative for “revolutionary re-education,” the South’s National Intelligence Service (NIS) reported.

The agency said Choe was removed from power partly to take responsibility for a partial collapse of a power plant in Yanggang Province.

Kim Yong-chun, who was vice marshal in the North Korean military, a position now held by Hwang Pyong-so, was also demoted and now holds a minor position in the party.

A more dramatic fate befell a former minister of the Peoples’ Armed Forces, Hyun Yong-chol, a position equivalent defense minister, who was reportedly executed in May for being disloyal to Kim Jong-un, possibly for dozing off during a meeting presided over by Kim, according to the NIS.

The most dramatic reversal of fortune was the 2013 execution of Jang Song-thaek, Kim Jong-un’s uncle and mentor, who was clearly considered a rival power center that had to be eliminated.

“Personnel changes within the military have been so frequent that a person assigned to a new job can be replaced even before he learns of new duty in detail,” said a military official in Seoul who asked for anonymity.

There has been such a rapid turnover in the 15 all-important military positions that 40 officials have rotated through those positions over the four-year period.

The shake-ups demonstrate that Kim Jong-un is paying utmost attention to the power landscape within the military.

“As per the saying that political power grows from the barrel of a gun,” said Jeon Hyun-joon, director of the Northeast Asia Peace and Cooperation Research Institute, “Kim Jong-un appears to have focused his carrots-and-stick tactics on the military.”