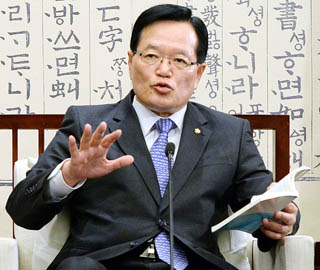 National Assembly Speaker Chung Ui-hwa holds a press conference on Wednesday at the National Assembly, where he announced that he will not use his authority to put to a vote government-backed economic and labor reform bills. [NEWSIS]

National Assembly Speaker Chung Ui-hwa said he will not wield his authority to put pending bills to a vote, snubbing multiple Blue House requests to put economic and labor-related bills on the floor.

The five-term lawmaker’s response came despite the Blue House’s efforts to urge the speaker to exercise his authority to put to a vote ruling party-backed bills to reform Korea’s labor market, revitalize the economy and strengthen counterterrorism by the end of the year.

Chung said in a press conference Wednesday morning that while he acknowledges the dire economic situation in Korea, he could not find a legal basis to use his authority as speaker because the current situation could not be considered a “national emergency.”

“I do not agree that the current economic situation can be considered a national emergency,” he said.

Chung stood firm despite efforts by Hyun Ki-hwan, the senior presidential secretary for political affairs, who met with Chung on Tuesday to urge the speaker to exercise his power to put pending bills to a vote amid the gridlock between the ruling Saenuri Party and the main opposition New Politics Alliance for Democracy (NPAD).

President Park Geun-hye has also repeatedly pressed that the National Assembly approve the bills, emphasizing that if they are not passed immediately, it could contribute to “large-scale unemployment.”

However, Chung did say that he was still considering sending the issue of redrawing the electoral map for next year’s general election to a plenary session for a vote by the end of this year.

The leaders of the ruling and opposition parties on Tuesday failed to agree on how to reconfigure the electoral map for the April election, though time has run out for deliberations.

“If the ruling and opposition parties do not come to an agreement by the end of this month at the latest, all the responsibility for what will ensue will have to be shouldered by me as the speaker,” Chung said during the press conference.

He added that he would have to resort to “special measures” if an agreement on redrawing the electoral map was not reached by the end of the year. “If Dec. 31 passes, I think this can constitute a legislative emergency,” he said.

If the parties fail to pass a new electoral constituency bill by the end of this year, the current district system will be invalid starting Jan. 1, an unprecedented scenario in the lead-up to the general election.

Chung refusing to use his authority for the pending bills, and consequently rebuffing the request by the Blue House, is expected to put more pressure on the negotiation process between the ruling and opposition parties.

Saenuri Chairman Kim Moo-sung said on Wednesday that the party was “reviewing” a presidential emergency order to speed along the process of approving the pending economic bills.