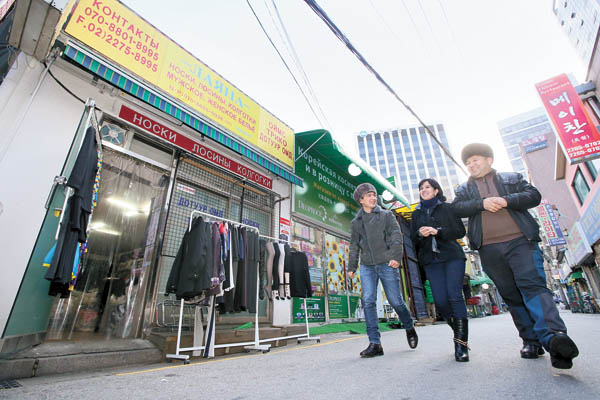 While some elderly baseball fans may remember Gwanghee-dong in Jung District, central Seoul, as a good place to find a bar after watching baseball games at the old Dongdaemun Stadium, the area evolved into a more exotic locale in 1990 when Russia established diplomatic relations with Korea. Gwanghee-dong is now known as Central Asia Street.

Since 1990, traders from Central Asia who patronized Dongdaemun Market carved out their own part of Seoul in the small alleys of the area.

Signs in Cyrillic script, an alphabetic writing system used in countries of central Asia such as Russia and Mongolia, can be spotted everywhere.

“Clothes sold at Dongdaemun Market are popular in Russia because they are of good quality and have great designs,” said Vialetta, a 42-year-old owner of a Russian clothing store. “And they’re cheap as well.” 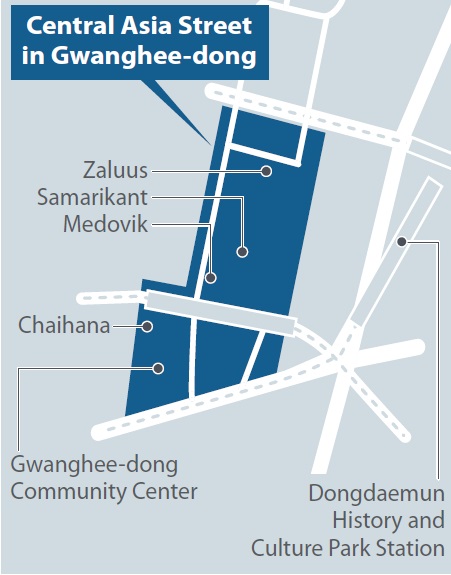 Koreans who visit the area are often curious about a unique scent pervading the lanes, which is cumin, commonly used in central Asian cuisine.

Some stores in the area sell foods that cannot be found even in Itaewon-dong, the most international of Seoul’s streets.

Samarikant is an Uzbek restaurant that has been on the street for 13 years. Many who visit the restaurant feel like they are actually in Uzbekistan since chapan, Uzbek traditional costumes, are hung on its walls and televisions in the restaurant broadcast Uzbek programs.

“Koreans love pilaf, an Uzbek fried rice,” said a 35-year-old cook at the restaurant, “and shashlik, skewered and grilled lamb.”

Chaihana, is a bakery behind the Gwanghee-dong community center. It sells colorful cakes that attract visitors. A Russian-style honey cake called medovik is one of the most popular items along with lepyoshka, a flatbread baked in a stove.

“As Koreans say they must eat rice, we Uzbeks eat lepyoshka to have a full stomach,” said the 31-year-old owner of the bakery.

The centrally located New Kumho Town building is nicknamed Mongol Tower. It is a 10-story building with restaurants, travel agencies and stores that sell old mobile phones. They’re almost all run by Mongolians.

“The building serves as a common space where Mongolians living away from home meet each other and share information that helps them live in Korea,” said Munkzaya, who is from Mongolia.

Zaluus, a Mongolian restaurant on the third floor, serves suutei tsai, a green tea with milk and salt.

Gwanghee-dong had a somewhat rough transition in the early days. The newly arrived foreigners fought with local residents on issues like using recycling bags for trash, which the foreigners weren’t used to. Some of the Korean residents had prejudices against them.

They started to get along better after policemen who speak Mongolian or Russian were assigned to Gwanghee-dong Police Precinct and a committee from a local community center tackled problems.

“We are now so close to each other that we even invite them to local events and make kimchi together,” said Cho Chang-dae, a local resident.

“We recently replaced around 100 old shop signs for free, and we plan to develop the place into a multicultural village like Itaewon,” Choi Chang-sik, head of the Jung District Office, said.