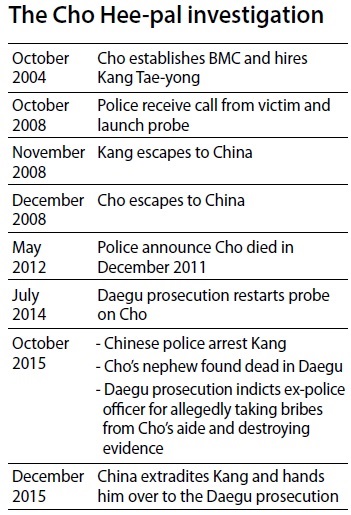 Chinese authorities on Wednesday handed over a key suspect in Korea’s largest-ever pyramid marketing scheme, responding to requests from local prosecutors who suspect the 54-year-old was responsible for scamming his investors out of a total 4 trillion won ($3.4 billion) from 2004 to 2008.

Kang Tae-yong arrived at Gimhae International Airport in Busan around 4 p.m., handcuffed and led by Daegu prosecutors who flew to China earlier in the day to retrieve him. He was immediately taken to the Daegu District Prosecutors’ Office for questioning.

“I committed a sin worth dying for,” he said in front of an army of reporters at the scene.

Kang Tae-yong was arrested by Chinese police on Oct. 10, seven years after he was listed as one of Interpol’s most wanted. He formerly served as the vice chairman and financial manager of a company run by Cho Hee-pal, who ultimately ripped off nearly 50,000 investors in the country’s most notorious pyramid scheme to date.

Daegu prosecutors believe Kang could offer clues about Cho’s whereabouts and the money with which he and his aids fled. Kang will likely be indicted as early as Thursday on approximately 30 charges, including embezzlement and bribery.

Kang fled to China in 2008, followed shortly thereafter by Cho, who reportedly paid a fisherman 70 million won to smuggle him there. Local police announced Cho’s death in May 2012, claiming that he had died in December 2011 from a heart attack in Qingdao, which essentially brought the case to a close with few known suspects.

The case was reopened two years later when a flood of angry complaints from the victims left open the possibility that Cho might still be alive and that his close aids may have gone under the radar.

At least 15 police officers and prosecutors have been arrested so far on allegations that they took bribes from Cho and his aides in return for hiding evidence and sharing confidential information with the suspects. Prosecutors believe Kang orchestrated the financial channels.

Cho established the Big Mountain Company - on paper, a medical equipment and supply business - in Daegu in 2004, and over four years opened more than 10 branches in other cities under different names. Until 2008, he swindled some 50,000 investors with the promise of high returns on their capital.

On Oct. 20, Cho’s 46-year-old nephew, who served a year in jail for helping his uncle flee Korea, was found dead in an apparent suicide. The man, only identified by his surname Yoo, was with Kang when Chinese police arrested him. Yoo flew back to Korea on Oct. 11, free of any charges.

Three days before his death, he hinted that Cho was still alive, claiming that Kang had kept in touch with him in China while living a life of luxury.