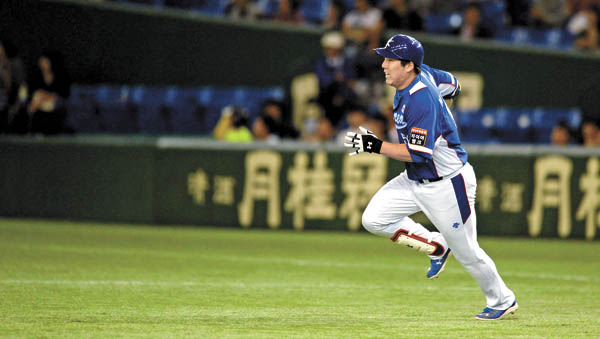 Korea’s Kim Hyun-soo runs base during a Premier 12 final against the United States last month. Kim left for the U.S. on Thursday to likely sign with the Baltimore Orioles. [NEWSIS]

Kim Hyun-soo, a free agent outfielder from the Doosan Bears, left for the United States on Thursday as he is set to sign with Major League Baseball’s Baltimore Orioles.

The Orioles and Kim have agreed to a two-year contract worth $7 million, though the deal is pending medical tests, according to the Baltimore Sun newspaper on Thursday,

Media reports have linked Kim with the San Diego Padres and Oakland Athletics, but it looks certain Kim will sign with the Orioles.

According to Bears officials, Kim took a flight to Washington D.C. on Thursday, which is about an hour drive to Baltimore.

Kim, 27, didn’t attend the annual MLB Winter Meetings last week in Nashville, Tennessee, but sent his agent to look for the teams that he could play for next season.

Kim, who bats left and throws right, became a free agent after leading the Bears to the Korean Series this year, while completing nine full seasons in the Korea Baseball Organization (KBO).

The Bears said they could offer Kim 10 billion won ($8 million) over four years, which would have made him the most expensive player in KBO history, but the 2008 KBO batting champion wanted to search for opportunities overseas. He earned 750 million won this year.

“I congratulate him,” Bears general manager Kim Tae-ryong told Ilgan Sports, an affiliate of the Korea JoongAng Daily, on Thursday. “He will be remembered as the first player to go to the majors through our club.”

Dan Duquette is executive vice president of baseball operations for the Orioles, who finished third in the American League East Division this season behind the Toronto Blue Jays and New York Yankees.

Duquette has a history of bringing Koreans into the MLB. While he was the general manager for the Boston Red Sox from 1994 to 2002, the 57-year-old American signed three Korean pitchers - Kim Sun-woo, Cho Jin-ho and Lee Sang-hoon - and all featured in the big league.

Chong later failed his medical test, while Kim’s deal was hit by administrative issues. Yoon signed with the Orioles in 2014 but never played in the majors and returned to his former club, the Kia Tigers, this year.

Duquette said earlier this week that the team is looking for a left-handed hitter, and they are working on it.

If Kim inks the deal with the Orioles, he will be the first Korean to enter the big leagues as a free agent from the KBO. Previously, Ryu Hyun-jin, Kang Jung-ho and Park Byung-ho, who went to the MLB directly from the KBO, inked their deals with U.S. clubs through the posting system.

Though financial details weren’t confirmed, Kim’s salary will be bigger than the Minnesota Twins’ Park Byung-ho who recently signed a guaranteed four-year deal worth $12 million through the posting system.

Kim could play against Park in the 2016 season opener if a deal is struck, as the Orioles and Twins are scheduled to face each other on April 6 at Camden Yards in Baltimore.

He had a fantastic season this year. While helping the Bears to the Korean Series title, he also led Korea to win the Premier 12 and was named MVP of the inaugural baseball tournament.

The 1.88-meter (6-foot-2) hitter is also known for his ability to screen the pitch. He struck out only 63 times in 630 plate appearances while drawing 101 walks this year in the KBO.

Kim, who has won gold medals in the 2008 Summer Games and two Asian Games, is also known for his durability. He has played at least 120 games in the last eight seasons.