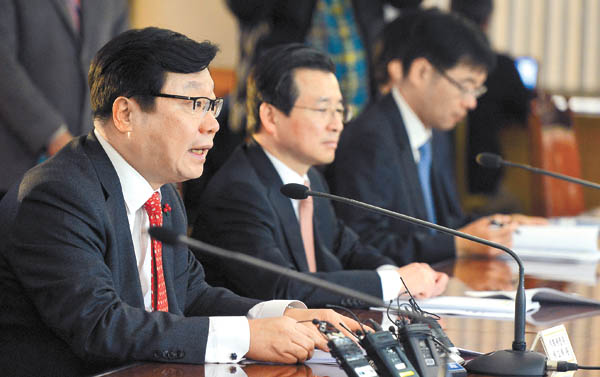 Joo Hyung-hwan, vice finance minister, at the macroeconomic financial industry meeting held at the Federation of Korean Banks in downtown Seoul on Thursday, where the main issue was the interest rate hike by the U.S. central bank on Wednesday. [NEWSIS]

The U.S. Federal Reserve’s decision to raise its base interest rate may have cleared immediate uncertainties, but it is expected to be a threat to Korea’s private sector in the long term.

Local analysts say highly indebted companies, the so-called zombie companies, are at greatest risk, while exporting manufacturers may see volume shrink in the long term in emerging markets and the United States.

Exports to emerging markets - in particular the “Fragile Four” countries of Turkey, Indonesia, Brazil and South Africa - are highly likely to slump if they fall into default, the Korea International Trade Association said.

“Korean companies in emerging economies have recently reported their orders being delayed, canceled or even being unable to receive a payment due to soaring exchange rates with the U.S. dollar,” Jang Soo-young, a researcher at the trade strategy team at the Korea Trade-Investment Promotion Agency (Kotra), said.

The strong dollar will lead to a price decline in crude and other raw materials, leading emerging and crude producer countries’ exports to fall and therefore shrink their imports of Korean products. The sluggish Chinese economy and its devaluation of the yuan may become a large threat to Korea and other emerging economies.

“Korea should concentrate its export capability on India, Mexico and Vietnam, those more free from the U.S. rate hike in the short run, while keep working on enhancing products’ competitiveness for the future,” Jang said.

However, the future of Korean exports to the U.S. is not all good.

“In the short run, Korean exports to the United States will rise as the American domestic economy maintains a fair recovery pace, giving room for Korean exporters to sell more,” Moon Byung-ki, a senior researcher at the Institute for International Trade, said.

Moon warned Korean exports to the U.S. may face a larger threat in a long term. He said, “The strengthened dollar is likely to weaken the price competitiveness of American products and eventually become an obstacle for U.S. exports, which means Korean materials and parts exporters that supply products to American manufacturers may suffer.”

Exporters of electronics and home appliances may face shrinkage in their shipments to the U.S., as consumers there close their wallets to boost savings, the Kotra expected.

However, experts warned that so-called zombie companies - which are unable to cover their loan interest with revenue - may suffer bigger problems. There are more than 3,000 zombie companies, most of which are small and midsize, belonging to the shipbuilding, shipping, steel and construction industries. Some notable conglomerates have also become zombie companies after suffering from excessive competition against Chinese rivals and a lack of demand.

The debt-ridden zombie companies may face heavier financing costs if corporate credit ratings get downgraded, and the volume of their dollar debt piles up, analysts said.

At every 0.5 percentage point of a market interest rate rise, 300 more companies turn into zombie companies, a recent study by the Bank of Korea (BOK) says.

“Many exporters tend to issue debt in U.S. dollars or the currency of where they are exporting to, so some of these companies may face their dollar debt blowing up,” said a researcher from the Korea Institute for Industrial Economics and Trade (KIET), who requested anonymity. “If the BOK raises the base rate at home, this also becomes a burden for corporate borrowers who made loans in won from local banks.”

Analysts warn the situation is also grim for non-zombie companies.

“If financial regulators tighten loan assessments like they do on household borrowers and put tighter rules on loan maturity extensions, those current non-zombies may turn into zombies,” the KIET researcher said, adding that small and midsize firms will be more vulnerable in such cases.

That is one of the reasons many experts say industry-wide corporate restructuring is a must to minimize the impact of the dollar rate hike.

Regulators are working on restructuring debt-ridden companies and their debts, as well as lenders.

“Managing corporate debt is as significant as household debt,” said Kwon Dae-young, director at the financial policy division at the Financial Services Commission (FSC). “Corporate debt may get problematic, because [each borrower’s debt] is much larger in scale, compared to household debt, and may become a threat to local banks”

The FSC finished credit re-evaluations of small and midsize companies at the end of October and is currently wrapping up those for conglomerates to announce the result in January, Kwon added. It is also stressed testing local banks to reassure soundness.

“The government should evaluate each industry’s business environment carefully before deciding to push a lending control,” said Cho Young-moo, researcher at the LG Economic Research Institute, regarding the regulator’s strategy on corporate lending rules. “If the sluggishness is temporary, lending regulations shouldn’t get tightened, but if it is a global trend, the regulation should take place.”

Korean lenders have accelerated sales of bonds to bolster capital amid concern the government’s drive to restructure struggling companies will lead to more bad loans, Bloomberg said on Thursday.

“Banks want to create an adequate buffer preemptively ahead of the strengthened capital rules as the government’s push to restructure zombie companies may worsen their capital-adequacy ratios,” said Lee Kyoung-rok, a Seoul-based credit analyst at Daewoo Securities.