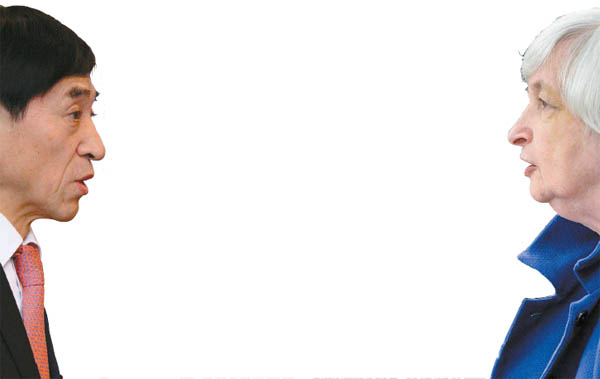 To raise or not to raise - that’s the question that will be haunting Bank of Korea (BOK) Gov. Lee Ju-yeol, who is now facing his biggest challenge since becoming the nation’s top monetary policy decision maker a year and a half ago.

As the U.S. Federal Reserve has raised its interest rate 0.25 percentage points for the first time in nine years, the market is looking closely at what Lee’s next move will be. Will he raise the seven-day repo rate or keep it at its current level? Or, will he take the bold move of lowering it?

The decision Lee has to make next year won’t be easy.

Lowering the interest rate to help the economy reach its 3 percent growth target next year by bolstering consumption would lead to stronger expansion in the domestic market. But this comes with a risk. If the Korean central bank lowers the key rate as it did between the second half of last year and until June, it could bring about a panic in the domestic market largely resulting from a massive exodus of foreign investors.

Unfortunately, raising the interest rate won’t be easy either, considering the huge debts of households and companies accrued in recent years.

Unlike other advanced economies that have been deleveraging since the global crisis of late 2008, Korea’s debt has been breaking new records every quarter.

Many market experts are betting that the Korean central bank will likely keep the interest rate unchanged at least until the first half of 2016 and gradually follow the path of the U.S. central bank in the long run, especially when the Fed makes additional rate hikes next year.

In fact, BOK Gov. Lee already made it clear that the Korean central bank has no interest in raising the key interest rate immediately after a U.S. rate hike, during a press conference held after Korea’s monetary policy committee decided to freeze the nation’s benchmark borrowing rate at 1.5 percent for the sixth consecutive month on Dec. 10.

“A rate hike by the U.S. Fed will not directly lead the BOK to adjust its rate upward,” he said. “Our base rate already reflects the expected rate increase, and we have enough time to respond to it.”

Historically, the BOK’s monetary policy has slowly followed the U.S. policy direction. The U.S. Fed lifted its rate six times, from 4.75 percent to 6.5 percent, between June 1999 and May 2000. The BOK raised its rate in February and October 2000.

But in 2004, the BOK decoupled itself from the Fed. While the Fed increased its rate 17 times from June 2004 through June 2006, the BOK cut its rate in August and November 2004, judging that domestic conditions were more important than overseas factors. Foreign investors purchased 10 trillion won ($8.5 billion) worth of local shares in that year, and there was no capital outflow.

Even though the Korean central bank governor could hold the key interest rate in the first six month of next year, the decision will still be highly affected by how fast or how slow the U.S. central bank raises its own rate.

“As much as the U.S. Fed has raised the interest rate by 25 basis points, the biggest interest has shifted to when the next hike will be,” said Byun Joon-ho, an analyst at HMC Investment & Securities.

Some experts, like Prof. Kim Jung-sik of Yonsei University, expect the Fed to raise the interest rate twice in the first six months of next year.

“It is highly likely that the U.S. will raise the rate two times until July,” Kim said. “It seems reasonable for the Korean central bank to lift its rate around that time.”

Others, like Byun of HMC Investment & Securities, think the Fed is unlikely to make changes in the first quarter.

“The biggest factor will be inflation,” Byun said. “Recently, various economic indices including the industrial output have been falling below expectations and as a result, U.S. inflation is unlikely to see a sharp increase.

“The inflation situation in the United States is an indicator that could mean the U.S. interest hike will likely take place slower than many have expected, and the possibility of a hike in the first quarter is low.”

Other experts agree, including the nation’s leading securities brokerage firm Samsung Securities, which downgraded its forecast for the Korean borrowing rate from 1.75 percent to 1.5 percent until late next year - meaning it thinks the central bank will keep the rate unchanged.

“We had expected the central bank to raise it in the fourth quarter next year, but because of the government’s economic policy to boost domestic consumption, it has become more likely that the monetary policy will be kept loosened until next year,” said Stephen Lee, an economist at Samsung Securities.

“The U.S. rate hikes will not be fast, so the pressure on the BOK is not much,” said Lee Chang-seon, an economist at the LG Economic Research Institute. “Given that consumer prices aren’t expected to rise sharply, a rate hike by the BOK will not be made in 2016.”

As experts expected, the BOK has maintained the stance that it will wait and watch the market for now.

“The Fed made a 25 basis point increase as we expected and as it promised,” Gov. Lee told reporters on Thursday. “The market response seems positive, and our stock prices are rising, which indicates the Fed rate hike is well-accepted by the market.”

The Fed has been saying it will make “gradual” hikes in the rate in the future, which is a positive message for emerging markets, Lee said.

“Since the U.S. market looks stabilized, the Korean market will not be impacted much,” Lee said. “But there are high possibilities of market changes such as oil prices, so we decided to keep an eye on things.”

But some foreign investment banks are betting that the Korean central bank will boldly make additional rate cuts next year, considering the dire situation that the Korean economy is in.

BNP Paribas cited in a recent report that due to falling exports and low inflation, the Korean government will need additional boosts for the economy, and the central bank is expected to make a rate cut in the first quarter of next year.

“The latest clutch of Korean monthly data shows current conditions remain fragile, reflected in an across-the-board decline in business confidence,” said Mark Walton, an economist at BNP Paribas. “Inflation has been edging higher, but lags to softer global food and energy prices point to a resumption of headline disinflation in the coming months. As a return to trend growth is unlikely in the foreseeable future, the onus remains on policy to provide a boost. The lion’s share of policy pressure is likely to fall on the Bank of Korea.”

Credit Suisse said the BOK could lower the rate one time next year, if demand for Korean exports is sluggish in China and other emerging countries, or domestic market consumption turns more sour.

Goldman Sachs projected a rate cut in the second quarter of next year, citing low inflation and tighter management of household debt.