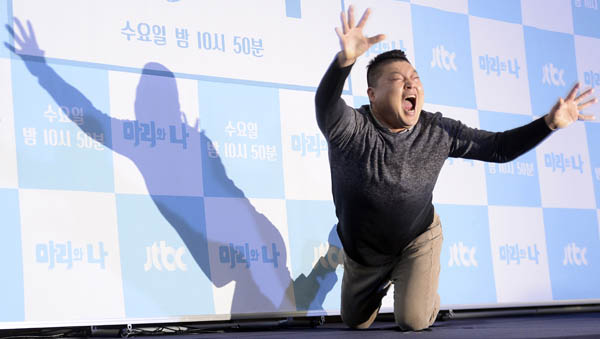 Entertainer Kang Ho-dong has made a comeback on the small screen with a show that’s slightly different from his previous comical programs.

Cable channel JTBC’s new show “Marie and Me” will feature entertainers taking care of different animals temporarily. While some other entertainers looked after raccoons or pigs, Kang brought a cat named Toto home, and the cameras followed him spending time with the cat in his home.

Kang talked about how he felt about joining the program at a press conference on Tuesday in Seoul. The program, which ran its first episode on Wednesday, will air at 10:50 p.m. on Wednesdays from now on.

Q.What made you decide to participate in this show?

A. There are many people who think I would be capable of taking good care of cows or farming, but in fact, I don’t know much about animals. I have not had much of a chance to spend time with animals, but I became more curious about the world of animals since there are many people around me who love their animal companions.

As I was offered to join the program, I wanted to learn more myself about how these people communicate with animals. This show is where the audience can feel warmth between people and animals, people and people, and animals and animals.

What was your first impression of participating members?

Because there were animals around, I don’t remember my first impression much of people around me, even though I met many of them for the first time (laughs). The first animal I met was a cat named Toto. I had never touched a cat before. It was scary for me to touch a cat, but I started to change my view of cats. So lovely.

What aspect of your character do you want to show through the program?

I want to show various sides. I want to be loved for doing a good job. I was at first worried because I [know little about animals], but the production staff said that it is more important to show sincerity. I think that’s true. However, there were many startling moments because I had no experience [with animals.] I think that’s the new side of me I’m presenting to the audience. I want to show my loving and warm side.

Are you used to cameras filming you continuously?

I felt sorry for not doing anything when the camera was rolling. But the production team told me it’s okay for me to not do anything. It was so confusing at first, but I [got used to it].

I’m very nervous as much as I want to do well. As I pay attention to fellow participants when I film a program, I will put my sincerity toward sympathizing with animals this time. I hope the audience will take away a warm feeling every Wednesday night.