Hani to join as host of KBS Song Festival

Hani to join as host of KBS Song Festival 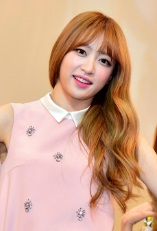 This year’s KBS Song Festival will be hosted by comedian Lee Hwi-jae, Taecyeon from the K-pop boy group 2PM, and Hani (pictured) from the girl group EXID.
KBS said on Friday that Hani will join Lee and Taecyeon, who also hosted the year-end music festival last year.
The broadcaster added that 27 K-pop acts will make the stage on Dec. 30.
The festival will be held at the new Gocheok Sky Dome, located in Gocheok-dong, Guro District, western Seoul.
By Sung So-young