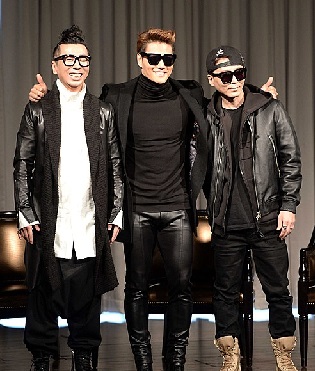 The ’90s dance duo Turbo is coming back as a trio and set to release its sixth regular album on Monday.
The newest album marks the 20th anniversary of Turbo’s debut and will be the first album released under the name of Turbo in 15 years.
Before the official release, Kim Jong-kook, center, Kim Jung-nam, left, and Mickey showed up at a press event on Friday at the Riverside Hotel in Jamwon-dong, Seocho District, southern Seoul.
“After the Totoga, I thought we should release an album [under the name of Turbo], although I can release solo albums,” said Kim Jong-kook, who enjoys tremendous popularity in China for his appearances on the popular TV show “Running Man.”
Thanks to the huge fandom in China, he recently resumed his singing career as a solo artist in China.
Totoga is a Korean acronym for a special episode of the popular TV show “Infinite Challenge,” in which it gathered together the ’90s musicians for a special concert.
“I can release solo albums, but when I perform as part of Turbo, I can challenge various genres of music. I thought it would be a good chance for me to show different sides of me,” Jong-kook added.
Jong-kook debuted in 1995 as a member of Turbo, and the dance duo instantly soared to stardom. But Kim Jung-nam left the group in 1997 and was replaced by Mickey.
Turbo broke up in 2001, leaving behind numerous hits.
The upcoming album has 17 tracks of various genres from dance to medium-tempo ballad.
Comedian Yoo Jae-suk lends his voice to the title track “Again,” and actors Cha Tae-hyun and Lee Kwang-soo, who are close friends of Jong-kook, appear in the music video.
Other singers such as R&B diva Park Jung-hyun, rapper Jessi and balladeer K-Will are also featured.
BY SUNG SO-YOUNG