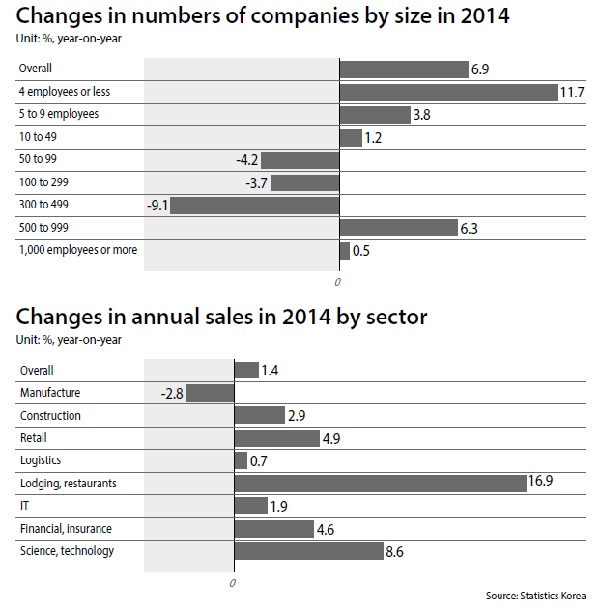 Korea’s midsize manufacturers suffered the most last year from the sluggish domestic economy and slowing exports, even though the private sector did fairly well considering the low growth, data from Statistics Korea showed.

According to the data released Friday, manufacturers overall saw their annual sales shrink 2.8 percent compared to 2013, when they grew 0.9 percent year-on-year.

“The overall industrial economy grew slightly despite the sinking of the Sewel ferry, but manufacturing was the only sector that showed shrinkage as the global low growth trend settled last year,” said Moon Jeong-cheol, director of the administrative data management department at Statistics Korea. “It definitely has a negative impact on the overall Korean economy, as manufacturing companies account for more than 40 percent of the total private sector.”

More than 36 percent of midsize companies do business in manufacturing and construction.

“The sheer number of midsize companies declining may have been caused by different reasons, not only bankruptcy but also M&A cases with another midsize or large company,” Moon added.

An official at the Association of High Potential Enterprises of Korea also suggested “there are some cases in which midsize companies divided their corporate bodies in order to regain the status of small companies.”

Many midsize companies that started out small suffered from strengthened regulations and reduced government support after expanding their businesses, the official explained, and some later divide to survive.

But the forecast for the coming year for these midsize manufacturers is not bright either, mainly due to the China’s slowdown risk.

Fitch Ratings picked Korean chemical, machinery and transport equipment manufacturers to be heavily impacted by China risk next year, even though Beijing experts expect the slowdown will be gradual.

“Demand for all of these products would likely weaken,” the ratings firm wrote in its report on Friday. “Korean companies compete directly with Chinese firms, and further yuan depreciation could erode Korean export competitiveness.”

An explosive increase of 11.7 percent last year in the number of small companies with less than four employees resulted in the expansion of the overall private sector last year.

“Many retirees find themselves opening little owner-operator shops in lodging and eatery businesses, which made the data show such high growth of these two sectors,” Moon explained. “This is not a good sign for the Korean economy, either, because the retirees had to go for a small business because there was no other choice.”