TV’s most popular chef expounds on his ambitions

TV’s most popular chef expounds on his ambitions 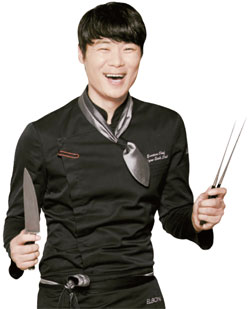 Choi Hyun-seok has undoubtedly taken the top spot this year as television’s most popular chef-turned-entertainer.

The 43-year-old has appeared on a number of cooking and entertainment programs, including JTBC’s “Please Take Care of My Refrigerator,” a well-received show on which each chef must prepare a dish within 15 minutes using the ingredients celebrities have on hand.

Choi is known for exaggerating his movements whenever he sprinkles salt or garnishes his food, for which he was bestowed the nickname, the “bluffing chef.”

But his life story has also made its way into the spotlight. Unlike most of his contemporaries, Choi never attended a university or studied abroad to master his craft. Even still, he currently serves as the executive chef of ELBON the table, an Italian restaurant located in Ilsan, Gyeonggi, and the Sinsa and Hannam neighborhoods of Seoul.

However, that doesn’t mean he’s immune to criticism: His style of molecular gastronomy, a discipline of food science that analyzes how ingredients change during cooking in order to create new flavors and textures, has been scrutinized by some as being far from legitimate.

The JoongAng Ilbo recently visited the original ELBON the table, located in Sinsa-dong, Gangnam District, southern Seoul, to talk with the 43-year-old chef and entertainer about his success.

Q. You appear on many television programs. Do you have time to cook at your own restaurants?

A. I used to appear regularly on five programs, but I gave up all of them except for “Please Take Care of My Refrigerator” because there just wasn’t enough time to create new dishes. I think I’ve done quite well in letting people know the nature of cooking as a job. I think I also contributed to elevating food culture.

I gave up appearing on those programs to realize two goals that I set eight years ago. One was to establish a cooking school. When I first went to university to teach, I was surprised by how clumsy students were at dicing ingredients. So I began with teaching how to cut carrots and radishes.

Even though cooking can be learned through reading books, repetition and getting used to it, making it a habit and achieving knowledge about it are more important. When I establish a cooking school, even though it won’t be certified, I will be aiming to cultivate cooks who are well prepared for actual practice that chefs will want to scout right after graduation.

What is your second goal?

It’s to open a restaurant under my name in a city famous for having delicious food. I will choose a city in Asia next year to fulfil this. I also belong to a management company that will help me plan and proceed with this plan. I don’t want people to consider cooking a low-paid job with a demanding workload. Even though I’m called the “bluffing chef,” I think the more I exaggerate my gestures and poses, the better the people dreaming to become chefs will be treated.

I’m also using my increased popularity in publicizing a campaign to eradicate the practice of not showing up despite having a reservation, which chefs call a “no show.” It aims to encourage people to let a restaurant know in advance that they cannot show up on the reserved date.

Rude guests are one of the most frequent topics of conversation among chefs.

Koreans think a guest is the most important person and consider dishes merely as things to eat. However, dining means not only eating but buying the time to dine. If a person misses a performance after buying a ticket for it, it’s that person’s fault. So why are restaurants treated any differently? Why should restaurants tolerate customers who don’t show up?

Even if a cooking show’s popularity on television is short-lived, cooking is my vocation. I want to be known as a “crazy chef” until the end. Regardless of what I did before and whether I studied abroad or not, I want to focus on the people who are good at cooking. And I will keep focusing on improving my own cooking abilities.