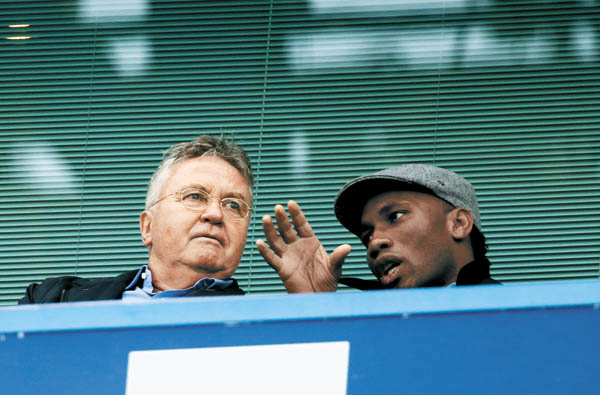 Guus Hiddink, left, talks with former Chelsea striker Didier Drogba during the English Premier League match on Saturday between Chelsea and Sunderland at Stamford Bridge stadium in London. Hiddink has been appointed manager until the end of the season. [XINHUA/NEWSIS]

LONDON - Guus Hiddink returned to Chelsea for a second term as manager on Saturday, hired until the end of the season with the tough task of turning around the struggling Premier League champions after Jose Mourinho’s firing.

As Chelsea beat Sunderland 3-1 under the temporary command of Steve Holland, Hiddink watched from the stands at Stamford Bridge with owner Roman Abramovich and former striker Didier Drogba, who has been linked with a coaching role.

The 69-year-old Hiddink’s latest firefighting role comes with Chelsea only four points above the Premier League relegation zone following an alarming slump just seven months after sweeping to the title.

“I am excited to return to Stamford Bridge. Chelsea is one of the biggest clubs in the world but is not where it should be at the moment,” Hiddink said. “However, I am sure we can all turn this season around.’’

Chelsea said that it views the Dutchman as a coach with a “wealth of top-level experience and success.” The club highlighted how fans were “singing his name following our final home game” of the 2008-09 season, but it was Mourinho’s name they were still chanting on Saturday.

Hiddink’s fortunes have faded since he was last at Chelsea. He quit as manager of Turkey after failing to qualify the team for the 2012 European Championship and did not win a trophy with Anzhi Makhachkala during a spell with the Russian club.

He has been out of work since being fired by the Netherlands in June during the latter stages of his country’s unsuccessful attempt to qualify for Euro 2016. He had five losses, four victories and a draw during his year in charge of a team that finished third at the 2014 World Cup under Louis van Gaal, now the manager of Manchester United.