Advances abound in the world of food tech

Advances abound in the world of food tech 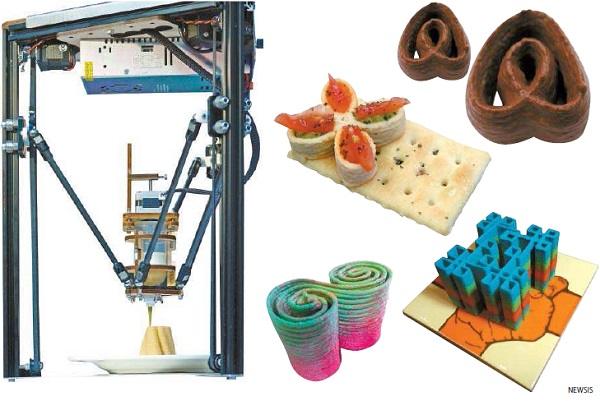 One promising area of food tech involves 3D printers, which can be used to print all different kinds of edible products. [NEWSIS]

Food technology has become a buzzword lately, with next-generation ingredients and techniques giving rise to booming areas of business.

Hampton Creek, a food tech company headquartered in San Francisco, sells mayonnaise made out of Beyond Egg, an artificial egg powder that uses only ingredients from vegetables. Its products don’t require any special care, and so they can be placed on shelves next to normal mayonnaise in grocery stores. The company also makes cookies and muffins using its egg substitutes, which are popular among consumers. Hampton Creek’s line of products are currently exported to 30 countries.

Bill Gates of Microsoft and Eduardo Saverin, one of the co-founders of Facebook, have invested roughly $120 million in the company.

Impossible Foods and Beyond Meat, both producers of sustainable plant-based meats and cheeses, are also garnering interest.

Impossible Foods use their meats and cheeses to make things like vegetable-sourced cheeseburgers. While all the ingredients are from plants, the taste, smell, color and even the texture of its meats are the same as that of the animal protein. It also doesn’t contain substances harmful to the human body like saturated or trans fats, which are naturally contained in some meats, and the company’s cheeses are produced with natural ingredients extracted from almonds and macadamia nuts. Impossible Foods aim to introduce their products to consumers by next year.

Exo is another American company that has jumped into the food tech business. It makes a protein bar out of cricket flour, getting in on the edible insect business that’s predicted to grow into a 38 trillion won ($32 billion) market by 2020, from 11 trillion won in 2007.

Advances in 3D printing are also creating developments in food tech. Modern Meadow succeeded in printing a piece of artificial meat through bio-fabrication, a process in which cells are used to grow materials like tissue and organs. The company cultured the cells from an animal’s muscle, then ran it through the 3D printing machine to produce a piece of meat.

One pioneer in the field is Luis Rodriguez, the founder of 3DigitalCooks, which creates cuisine based on 3D printing technology. He visited Korea on Dec. 8 to take part in the “Tech Plus Forum 2015,” which was co-hosted by the Ministry of Trade, Industry and Energy, the Korea Institute for the Advancement of Technology and the JoongAng Ilbo, during which he demonstrated how his 3D printer could produce various types of food. One of the most popular items for audience members was a dessert shaped like an elaborate tower.

Scientific ways of cooking, such as sous-vide and molecular gastronomy, are also becoming increasingly popular.

Sous-vide is a method in which meat or vegetables are heated at a precisely regulated temperature to ensure perfectly cooked dishes that retain more of their moisture than those produced with other methods.

Molecular gastronomy is another modern way of cooking that applies science to food to create totally new dishes by investigating the physical and chemical transformations of ingredients.

Even companies not traditionally associated with food are getting in on the action. IBM recently introduced a cooking app, Chef Watson, which provides recipes by using its artificial intelligence system. When a user chooses several main ingredients, the app explores various combinations of tastes and creates its own original recipes.

Outside of the kitchen, companies are creating new food tech that does everything from generating new retail markets to boosting crop yields.

One example is the Kakao Farmer Jeju service provided by Kakao, which has been recognized as an innovative way of developing a new market for crops. Tangerines from Jeju Island are well-known, but weren’t typically bought by consumers in their 20s and 30s. But Kakao Farmer Jeju allowed users to purchase tangerines with their smartphone, which resulted in a dramatic expansion of the purchasing groups in the tangerine market.

In the United States, investments are flooding into food tech companies focused on innovating production methods amid predictions of dwindling food resources, which are expected to fall dramatically in the next 40 years.

Google Ventures, the venture-capital arm of Google’s parent company Alphabet, led fund-raising for the Farmers Business Network (FBN), a start-up that provides advice to farmers using big data collected from farms across 17 states in the United States, and brought in a total of $15 million.

FBN offers information on which agricultural products to grow and practices to take by analyzing data reported from different farms in their network.

Here in Korea, companies have been focusing on “smart farm” technology. The technology enables increased production capacity with less labor from farmers. For example, a farmer can now manage production areas such as greenhouse by smartphone. Originally, farmers had to visit the greenhouse several times a day to check the temperature, humidity and supply of water. But the smart farm system enables a farmer to check the measurements at home and control the lagging cover, ventilator, water sprinklers and heaters installed in the greenhouse with the press of a button. Moreover, the big data analysis provided by the technology notifies the user of the best time for seeding, or if there’s a pest problem. The information helps save the farmer’s energy and money in the whole production process.

According to the Ministry of Agriculture, Food and Rural Affairs, households that have utilized the technology have seen their labor input cut by 38.8 percent among the farming households and productivity improved by 22.7 percent.

The newly released smart farming assistance service provided by SKT, called New Nongsa Jikseol, named after a Korean traditional farmer’s handbook Nongsa Jikseol, is one example. The service offers customized information for the entire process of farming, from the cultivation and planning stages to production and sales. If a rookie farmer is planning to begin cultivating cherry tomatoes, the technology examines whether it is a good idea, and even guides the farmer through the possible markets for the crop.

Naver, in the meantime, is establishing a platform that offers growth and development data for crops. With aims to enhance the productivity of crops, the platform utilizes big data collected to examine which fertilizer would work best at a certain temperature.