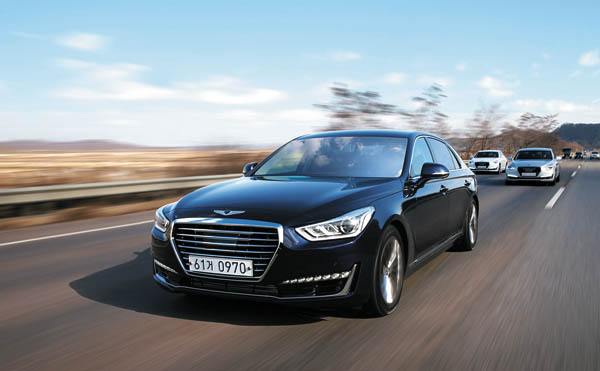 Hyundai Motor’s Genesis EQ900 on a test drive Thursday on a highway between Seoul and Chuncheon, Gangwon. [HYUNDAI MOTOR]


CHUNCHEON, Gangwon - The Equus, Hyundai Motor’s first top-of-the-line luxury sedan, became known as the “chairman’s car” soon after it was introduced in 1999. With a price tag that could hit 100 million won ($84,600), the car was mostly used by executives at big companies which offer luxe cars as perks.

The EQ900, the first car rolled out under Hyundai’s new luxe brand Genesis, is the company’s new flagship luxury sedan. When it was launched earlier this month, one of the hopes was that this new sedan could attract individual customers as opposed to companies, and appeal to younger buyers in a premium car segment dominated by global brands like Mercedes-Benz, BMW and Lexus.

One of the best ways to find out whether young people would like the EQ900 was to take it for a spin. On Thursday, Hyundai Motor provided the Korea JoongAng Daily with a brand new EQ900 for a 136-kilometer (85-mile) round-trip course between Seoul and Chuncheon, Gangwon. The test drive was done with a 3.3 Turbo Prestige model that sells for 111.95 million won.

One of the car’s most notable features is its Highway Driving Assist (HDA), an autonomous driving system for highways, which the automaker introduced for the first time in any local mass-produced car. Soon after the car reached a highway, I turned on the HDA, setting the car’s speed at 100 kilometers per hour. I then maneuvered behind a car that looked like it was going a bit slower. I wanted to check how quickly the HDA would respond to the other vehicle’s driving speed. 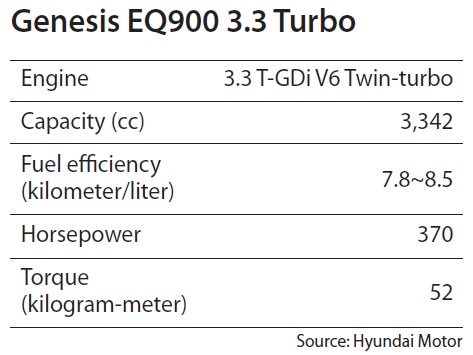 The car immediately lowered its speed to around 85 kilometers per hour in accordance with the speed of the vehicle in front. When the reporter lost control of the steering for a second while setting up music, the HDA immediately adjusted the steering wheel to keep the car from straying from its lane in cooperation with the built-in Lane Keeping Assist System. Using map data installed in its navigation system, the car also adjusted its speed in accordance with speed limits set at each section of the highway.

Drivers cannot take their hands completely off the steering wheel or else a warning will sound. Hands-free driving is still illegal in Korea no matter what kind of high-end technology is offered in a vehicle. But one thing is for sure: the EQ900 has successfully started the autonomous driving age in the Korean market.

Other than the HDA, the 2,185-kilogram (4,817-pound) car delivered excellent driving performance and acceleration thanks to its twin-turbo V6 engine that offers 370 horsepower and 52 kilogram-meter of torque. In order to test the vehicle’s torque and driving balance, I frequently changed the speed and lanes, and the car could not have handled it more smoothly. The 3,442-cc engine certainly offered dynamic handling power, but it was also incredibly quiet thanks to several anti-noise features, including double-cemented insulated glass.

After finishing the 68-kilometer course from the W Hotel in Gwangjin District, eastern Seoul, to the Road Hills Golf & Resort in Chuncheon, I sat in the rear and let someone else take the steering wheel. I wanted to feel how comfortable the EQ900 would be and whether it lives up to its self-proclaimed “human-centered luxury” on the trip back to Seoul.

The leather used for its interior walls is semi-aniline, which was developed in cooperation with Italian leather processing brand Pasubio. Special logs were used for the wood trim. The company is introducing a high-end seat called the “Modern ERGO Seat,” based on first-class seats in airplanes. In the rear, passengers are able to adjust the seating mode - to relax mode, reading or watching a video - by pressing a button. I pulled out a laptop and started typing a story for about an hour, and it felt like I was in a classic library - with much more cushiony seating.

The rear seat experience continued in Gangnam District, southern Seoul, where the traffic was jammed and there were way too many speed bumps. That proved that the Genesis Adaptive Control Suspension had much improved damping force, which was one of the weaknesses of its predecessor, the Equus.

As for the exterior design, the EQ900 has the look of a younger Equus, thanks to its Crest grille and adaptive full LED headlamps in the front and the rear body design with full LED rear combination lamps and twin mufflers. Drivers have eight choices for exterior colors, including black, platinum silver and marble white. It doesn’t look like a car for an old boss at a company. The EQ900 provides features that people can enjoy both behind the steering wheel and in the rear seats.

It looks like Hyundai Motor is managing to catch up with global rivals such as Benz and Lexus. The company received more than 10,000 orders in only 12 business days, adding that about 795 units of the EQ900 are being ordered per day, considerably more than the 579 daily orders for the second-generation Genesis sedan, which will be included in the Genesis brand and renamed the G80.

“Looking into data from the orders made, we could see that the number of individual customers for the EQ900 increased by 48 percent from the Equus,” said Kim Sang-dae, director of marketing. “The age of people buying the EQ900 fell from 57.3 for the Equus to 55.1 years old, which is a good sign for us. Those purchasing the 3.3 Turbo model are in their 40s and early 50s. Many people buying the EQ900 already have luxury cars made by foreign brands such as Benz and Lexus.”