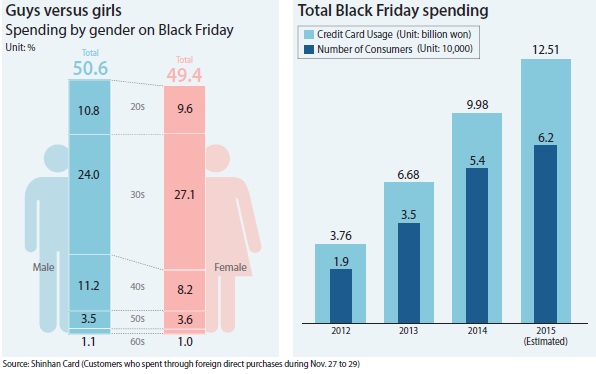 Kim Do-yun recently bought a 48-inch LED TV for his mother. Buying it from the U.S.-based online retailer Amazon.com, it was 33 percent cheaper than the average retail price here in Korea.

Especially because it was Black Friday, Nov. 27, the mega-shopping day in the United States.

“Black Friday was worth waiting for,” Kim, 33, said. “From now on, I am going to buy expensive home appliances through direct purchases from overseas.”

Black Friday is now as big with male consumers as it is with females. Shinhan Card analyzed its 62,000 customers’ credit card usage from Nov. 27 to 29 and found out approximately 31,400 Black Friday customers, or 50.6 percent of the total, were men. This was the first time men outspent women on Black Friday. 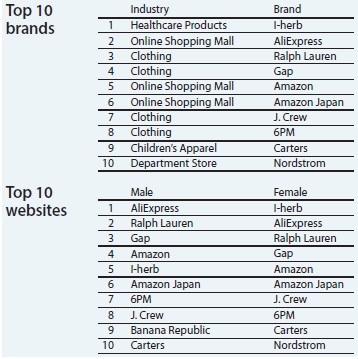 As Koreans become more interested in purchases of goods on overseas websites, their spending has increased. Shinhan Card customers spent approximately 12.5 billion won ($10.6 million) during this year’s Black Friday, which is 25 percent more than the last year’s spending total of 10 billion won.

“The total amount that our customers spent during Black Friday promotional events accounted for 5 percent of the total foreign direct purchases made this year,” said Lee Jung-eun, a researcher at the Shinhan Card Big Data Trend Research Center. “It appears that many people are waiting for Black Friday to purchase products at lower costs.”

As the number of male consumers grows, shopping trends are also changing. Normally, people spent the most on clothing and health care products. Half of the top 20 most-purchased items were related to clothing brands such as Ralph Lauren and Gap. I-herb, a manufacturer of vitamins and other health care products, was also one of the most-visited website for three straight years.

However, an increase was seen this year in people going to online retailers such as Amazon.com and China’s AliExpress, which offer both clothing and electronics.

“Based on recent technological developments, including smartphones, more male consumers are getting interested in online shopping,” said Jeon Sung-in, an economics professor at Hongik University. “The number of male customers will continue to grow, especially during promotional events when they can purchase electronics at lower prices.”

There were also more people shopping on local online retail outlets. According to the Bank of Korea, people spent more than 252.3 billion won a day through online and mobile payment transaction systems in the third quarter of 2015. The Bank of Korea started to release this data in 2007, and this year’s third quarter was the first time that daily spending exceeded 250 billion won.

Consumers who purchased through escrow systems, another type of transaction authorization system used in online stores such as G-Market and 11th Street, also increased, and their total amount of spending was 44.5 billion won a day.