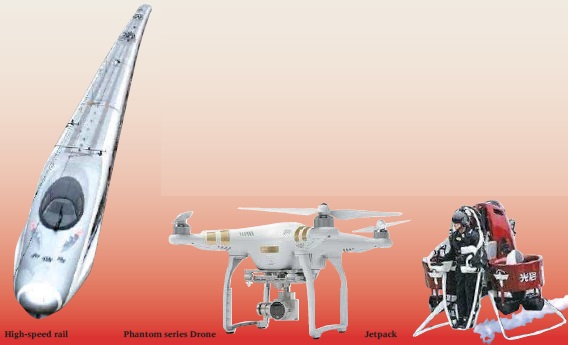 The “Made in China” label is becoming a major threat to global industries as the country shifts its focus to sectors previously dominated by Korean businesses.

From heavy industry shipbuilding and train making to high-tech developments, the largest country in Asia is casting a shadow over the Korean economy.

This is due to Chinese manufacturers offering a 20 percent lower price per unit in the international market.

“Chinese train-making technologies outpaced the Korean ones a long time ago, and it is now competing with Japan, Germany and France,” said Lee Bong-gul, a researcher at the Institute for International Trade.

Korea’s well-known semiconductor industry is also under threat from developing Chinese technologies. China consumes more than half of the semiconductors produced in the world. The Chinese government decided to finance the domestic integrated circuit industry with 120 billion yuan ($20 billion) last year. Additionally, Chinese business groups are buying semiconductor-related companies in other countries.

Some Chinese companies are recruiting Korean specialists by offering salaries five times higher than their prior salaries in Korea for at least three years. Many in the industry are familiar with this “1, 5, 3 offer.”

Many workers from small to medium-sized Korean semiconductor companies have already taken advantage of attractive offers and moved to China. A similar large-scale outflow of workers occurred in the past when China aggressively expanded its video display industry. China recruited a huge number of employees from the local liquid crystal display manufacturer Hydis and built the globally competitive display manufacturer BOE.

“China was a latecomer in technologies compared to other developed countries around the world, but its huge domestic market allowed it to grow rapidly,” said Seong Tae-yoon, an economics professor at Yonsei University.

The “Made in China” label is being strongly criticized for aggressive techniques.

The boss of one local company which supplies auto parts, was shocked by Chinese products’ specifications on display at a recent international exhibition. He said foreign buyers were packed around the Chinese companies’ booths while not many visited his site.

“I would not be surprised if our former engineers handed over blueprints to them,” an executive at the company said. “Chinese manufacturers do make mistakes in the beginning, but they eventually find solutions to fix them as they get used to the process, and this is why foreign buyers look for Chinese products.”

Korea’s main exporting goods, such as smartphones and TVs, are also being pursued by Chinese latecomers. Figures from the market research firm Gartner show that Samsung Electronics had the highest market share, or 23.7 percent, of smartphone sales in the third quarter. Apple was placed in second place with its share of 13.1 percent. Chinese brands Huawei (7.7 percent), Lenovo (4.9 percent) and Xiaomi (4.9 percent) were highly ranked, with the total of Chinese sales surpassing Apple and chasing Samsung. 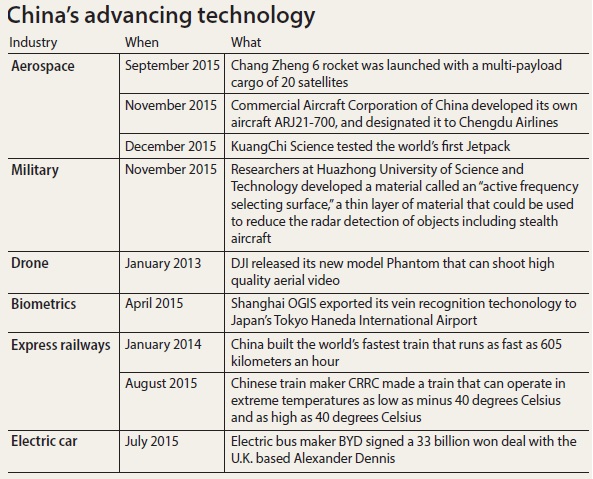 In the TV industry, Korean products made by LG and Samsung account for 31.7 percent of the total market. However, China isn’t far behind with 27.2 percent. Many buyers find Chinese products are now high-quality with lower prices. In some stores, Chinese HD TVs are being sold 20 to 30 percent cheaper than Korean brands.

“We are doing well in the U.S. market, which is very strict on product quality,” said a spokesman for Chinese home appliance maker TCL. “We are positive that our products don’t have much difference in quality and design compared to those produced by Samsung or LG.”

As well as electronics, China is also setting its sights on the shipbuilding industry. China continues to have the largest order backlog of ships in the world, stretching more than five years. It is also making inroads into the offshore plant industry, which has been led by Korean firms in the past.

Chinese tech giant Baidu successfully tested its autonomous car on roads earlier this month. The vehicle drove 30 kilometers by itself on highways and local roads and managed to keep pace with other traffic and recognized traffic signs and lights. It was driving 100 kilometers per hour on highways.

Chinese cutting-edge technologies also appear in big-budget movies. In the movie “Gravity,” Sandra Bullock rides in a Chinese spaceship and successfully lands on Earth. In the movie “Martian,” a Chinese rocket played a key role in a rescue plan to bring Matt Damon to Earth from Mars.

Chinese high-tech company KuangChi Science has also tested the world’s first Jetpack, also called an Iron Man Suit. The company said it can carry a 120-kilogram (260-pound) person for a maximum flight time of 45 minutes at a speed up to 80 kilometers per hour.

China is transforming its previous image of being a giant manufacturing nation to become the hub of advancing technologies in a variety of fields including aerospace, express railways and biometrics.

The state-run magazine China Aviation News has claimed that China succeeded in achieving hypersonic flight, reaching speeds of Mach 5 (6,180 kilometers per hour) in September. The Commercial Aircraft Corporation of China developed its own aircraft, the ARJ21-700, and designated it to Chengdu Airlines last month. According to the Korea Institute of S&T Evaluation and Planning, China has a technological lead of three to four years over Korea in the aerospace industry.

China is making inroads in the drone industry, even though it is competing with the U.S.-based Amazon and Google. Chinese drone maker DJI produces 70 percent of all civilian drones in the world.

Experts emphasize the only way for Korean companies to survive is to invest more on research and development. Some argue that Korean manufacturers need to pursue the “Made for China” strategy. “We need to make products that fit Chinese tastes,” said Chang Byung-song, a director at the Korea Trade-Investment Promotion Agency’s China department.