Another rep defects from NPAD to join Ahn

Another rep defects from NPAD to join Ahn 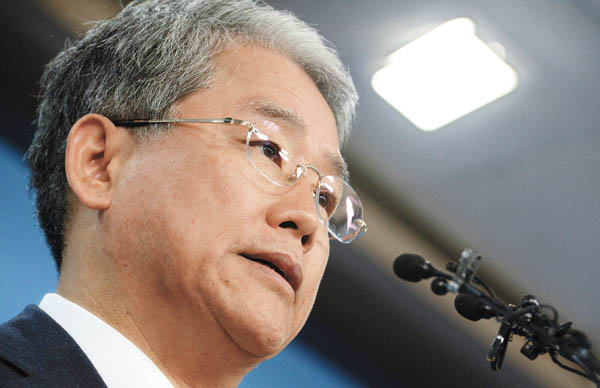 An opposition lawmaker on Sunday followed Ahn Cheol-soo in quitting the New Politics Alliance for Democracy (NPAD), the fifth representative to abandon the party and the Moon Jae-in leadership.

At a press conference announcing his departure from the party, Rep. Kim Dong-cheol made clear he was walking away from the NPAD in order to join Ahn’s efforts to create a new political party to compete against the NPAD.

“I have repeatedly demanded Chairman Moon make decisions that would contribute to a change of power in the Blue House,” Kim said. “In return, I was treated [by the inner party circle] as if I was only intent on fueling strife inside the party and challenging the current leadership and begging for party nominations for the general election.”

Kim is the first opposition lawmaker representing a Gwangju district to abandon the NPAD, whose number of lawmakers is down to 122. The southwestern city of Gwangju, known for its uprising against the Chun Doo Hwan military junta in May 1980, is the traditional stronghold of the NPAD.

The third-term lawmaker said he would work with Ahn and Rep. Moon Byung-ho, who also left the NPAD, to form a new party.

“At this point, I think the envisioned Ahn Cheol-soo party will be the only political force capable of promising new politics and replacing the current government,” Kim said.

Kim became the fourth NPAD lawmaker to follow Ahn, and it remains to be seen how many more will follow the software mogul-turned-lawmaker.

Four is a smaller number than initially expected. Rep. Song Ho-chang’s decision to stay in the NPAD came across as particularly damaging to Ahn given the close relationship between the two.

But more lawmakers representing South Jeolla districts could leave the NPAD as anti-Moon sentiment in that region is perceived to be running higher than among reps from the North Jeolla region.

Rep. Kim Han-gill, who co-chaired the NPAD with Ahn last year, gave Moon an ultimatum on Sunday to accept the demands of non-mainstream lawmakers to step down from his position, hinting that he could leave the party if his demand was not met.

“For the last time, I ask Moon to make a selfless decision for the sake of the party’s victory in the general election,” Kim posted on his Facebook page.

While the NPAD’s internal strife continues, the ruling Saenuri Party, which expected a political windfall from the split in the opposition, saw its approval rating actually drop in the latest survey.

In a poll conducted by Realmeter from Dec. 14-16 of 1,682 adults nationwide, the Saenuri Party received a 40.6 percent approval rating, 1.7 percent down from a previous poll, while the NPAD posted a 2.6 percent increase to reach 29.4 percent.

The poll was interpreted as a sign that the crisis within the NPAD led its supporters to rally around the party, while the Saenuri Party lost some supporters as some endorsed Ahn’s proposed party.