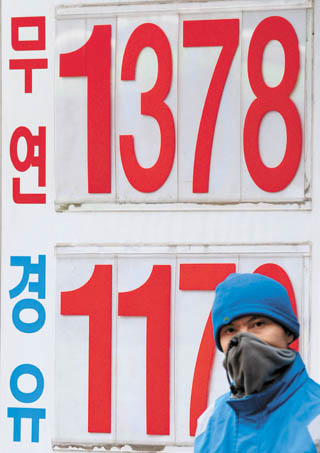 A gas station in Yeongdeungpo District, southwestern Seoul, shows a liter of gasoline selling for 1,378 won ($1.17) on Monday. According to the Korea National Oil Corporation, gasoline prices traded at 1,423.95 won per liter on average, or 1.7 won less than the previous trading day. The lowest price was recorded at 1,275 won per liter. It turns out that a liter of gasoline is cheaper than a Coca-Cola. According to the Korea Consumer Agency, a liter of Coke is 1,765.3 won per liter on average. The price of gasoline has fallen recently, largely on the back of declining crude prices. As of Friday, West Texas Intermediate futures traded at $34.73 per barrel, the lowest since February 2009. [NEWSIS]