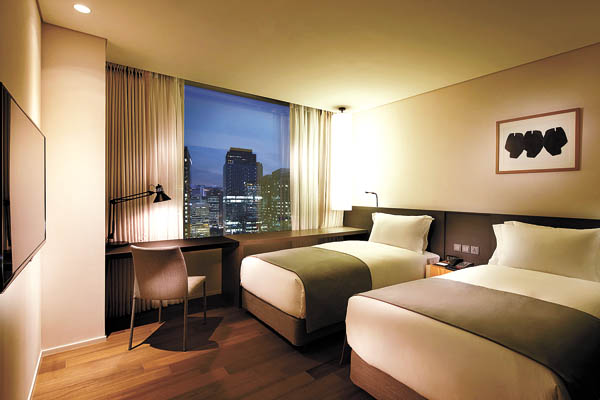 An inside view of a twin room at Shilla Stay in Gwanghwamun. [HOTEL SHILLA]

Hotel Shilla has opened its mid-range Shilla Stay Gwanghwamun hotel to attract a wider base of tourists and business travelers.

Located a five-minute walk away from Gwanghwamun Station in central Seoul, the hotel is targeting business travelers visiting government complexes and corporate headquarters in the downtown area as well as tourists.

Landmarks such as Changdeok Palace, Deoksu Palace and the Myeong-dong shopping district are all located in Seoul’s central districts and a natural draw for tourists.

With 339 guest rooms, the 19-story Gwanghwamun branch has a buffet restaurant, a business lounge, a fitness center and meeting rooms that can accommodate up to 80 people. 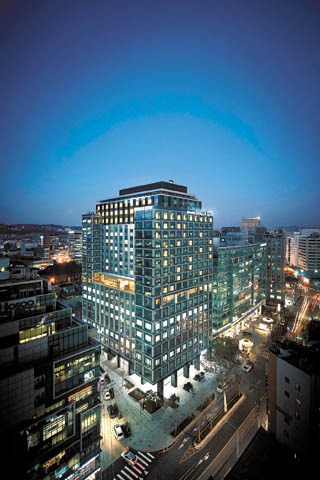 The buffet restaurant is also open to non-hotel customers, offering lunch at the relatively affordable price of 16,000 won ($14). Most mid-range hotels charge at least 20,000 won for lunch.

The buffet restaurant will convert into a bar at night.

The hotel will be the seventh branch of Shilla Stay, which first opened in Dongtan, Gyeonggi, in 2013.

Since then, the hotel operator has expanded its presence by opening both in Seoul and other regions, including Yeoksam-dong, southern Seoul; Seodaemun District, central Seoul; and Mapo District, western Seoul; and outside the city in Ulsan, South Gyeongsang and Jeju Island.

The Gwanghwamun branch is designed by Italian architect Piero Lissoni, who is known for his minimalist style. The Italian designer also designed other Shilla Stay properties, including the Shilla Stay Mapo.

The Gwanghwamun area recently emerged as an ideal place to house different types of accommodations due to its proximity to government buildings and corporate buildings.

Nearby Myeong-dong is filled with multiple hotel chains. Most recently, the Four Seasons debuted in Korea with its first branch near Gwanghwamun.

The five-star Canadian chain is aimed at bringing in foreign visitors and local customers.