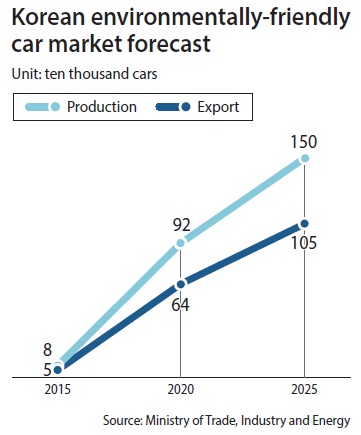 Tesla’s entry into Korea is expected to be a catalyst for the slow-growing local eco-friendly car market.

The leading American electric car manufacturer announced on Friday that it had registered to establish Tesla Korea Limited. It will likely start selling the Model S that can travel for 375 kilometers (233 miles) on a one-hour charge, which beats the average travel distance of 145 kilometers offered by other automakers. Tesla has plans to roll out the lower-priced Model 3 in March next year.

However, there are a number of roadblocks that Tesla will have to overcome before it captures a share of the Korean market.

The California-based company has a different approach to sales. Most automakers generally sell cars through dealers, but Tesla sells its vehicles through its own outlets. Since the Korean government only allows local car brands such as Hyundai Motor and Kia Motors to use such direct sales methods, it is questionable how the American company will resolve the issue. Mercedes-Benz Korea for instance has official dealers including Hansung Motor and KCC Auto.

Another concern is the vehicle’s charging system. Electric vehicles in Korea can be charged on three different systems known as Combo, CHAdeMO and the three-phase alternating current.

However, Tesla only uses its in-house-built super-charging system that isn’t compatible with others, meaning that they have to make additional investments in developing the necessary infrastructures.

Despite such concerns, Tesla is expected to impact the slow-growing Korean environmentally-friendly auto market, with its industry-leading tech levels and popularity. The Tesla Model S that is currently sold for about $60,000 in the United States was the best-selling luxury EV in many nations, including its homeland, Canada and Norway. Tesla, which sells in 20 nations, is expected to sell more than 50,000 EVs globally this year.

“The Korean eco-car market hasn’t grown up as expected since there were things that have not been resolved, including expanding necessary infrastructure like charging stations,” said Kim Pil-soo, president of the Korean Electric Vehicle Leaders’ Association (KEVA). “But companies like Tesla are coming into the local market because it has huge potential to grow in the future.

Korea is the world’s fifth-largest nation in car production, meaning it already has a system to launch a new business more quickly than others. Since Tesla is a leader in the industry, it will have some impact.”

Given the market potential, Tesla isn’t the only foreign automaker knocking on Korea’s door. China’s leading EV maker, BYD Auto, has plans to launch its Korean office next year to sell electric taxis with its key model, the E6. In cooperation with Korean bearing manufacturer Suncore, the Chinese company hopes to sell 1,000 K9 electric buses in the next two years, which are expected to operate in the Seoul and Gyeonggi regions.

“We expect the overall size of the market will bulk up if Tesla comes in since it is also related with other businesses like part makers, and the infrastructure will also be improved,” said a spokesman of BMW Korea, which was the first foreign brand to introduce an EV last year.

In response, Korea’s leading carmaker, Hyundai Motor, will roll out the Ioniq in the first half of next year.

The company said it will be offered in three power trains; the hybrid (HEV), plug-in hybrid (PHEV) and electric (EV), starting with the HEV in January.

“Consumers will get a vehicle that offers industry-leading fuel efficiency. The Ioniq is our very first piece in accomplishing our project of improving Hyundai cars’ overall fuel efficiency by 25 percent in next five years,” a Hyundai spokesman said.

In a meeting with reporters earlier the month, Kwak Jin, executive vice president of the domestic sales division for Hyundai, said Ioniq’s fuel efficiency will surpass the current industry-leading Prius made by Toyota.

Along with Hyundai, GM Korea will also join the battle with Chevrolet’s new extended-range electric vehicle (EREV), the Volt, which can run up to 80 kilometers with an electric motor only, or up to 676 kilometers using both fuel and the electric motor.

“Since many automakers will launch new vehicles and businesses in the first half, the local green car market is expected to significantly expand in the second half, when sales activities get more vitalized with diverse marketing programs,” said Kim from the KEVA.

According to data by the Ministry of Trade, Industry and Energy, the Korean environmentally-friendly car market will grow from this year’s 80,000 to 1.5 million units in 2025 in terms of production.

The ministry said earlier this year that it will build 1,400 additional charging stations in the next five years and will offer 1 million won of subsidies for each HEV, 5 million won for PHEV and 12 million won for EV buyers next year, respectively.

Lee Hang-ku, a researcher at the Korea Institute for Industrial Economics & Trade, said, “No matter how much international oil prices fall, the green car market will consistently grow since most of the nations in the world are aggressively trying to reduce emissions.

Korea shouldn’t lose its chance to develop competitiveness in the industry since it looks like the business will boom starting next year.”