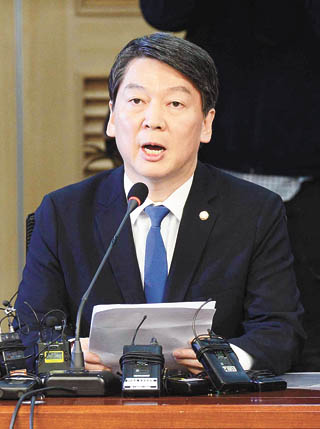 Rep. Ahn Cheol-soo announces at a press conference on Monday that he will found a new political party by early February with an ambition to win the next presidential election in 2017. [NEWSIS]

Ahn Cheol-soo, the political maverick who co-founded the main opposition party last year and abandoned it last week, said on Monday that he will create a new political party by early February with an ambition to win at least 100 seats in the April general election - and to win the presidency in 2017.

Ahn, a first-term lawmaker who quit the New Politics Alliance for Democracy (NPAD) on Dec. 13, held a press conference Monday morning with four lawmakers who left the NPAD last week to join him. The 53-year-old software tycoon-turned-politician made clear his goal to win the presidency with a new party.

Ahn first apologized to supporters for having failed to meet their expectations during his cohabitation with the largest opposition party.

Ahn said he has two goals for his new political party. The first will be winning the 2017 presidential election for the sake of the man on the street.

“Conglomerates and wealthy people have become more successful and happy over the past two administrations, but most of the ordinary people are living more difficult lives,” Ahn said. He promised that he and his new party will “fight for a younger generation angry at an unfair world.”

Ahn said his other goal is a political party that will usher in true political reform. He said his party will be a nationwide alliance that fights the old, cynical way of politics for the sake of the future.

He did not hide his contempt for the NPAD, calling it an obsolete political force.

“I don’t count on an alliance with the NPAD,” Ahn said. “The people have already demanded we change our outdated form of politics.”

Ahn left the NPAD on Dec. 13 after his demand to hold a new leadership election was repeatedly turned down by Chairman Moon Jae-in. The two were rival candidates in the 2012 presidential elections. Ahn bitterly withdrew from the race after being continually outmaneuvered by Moon. Moon was narrowly defeated by Park Geun-hye.

Ahn established his own political group, but later joined Moon and Kim Han-gill to found the NPAD in 2014.

While making clear that he was done with the NPAD, Ahn said he is still open to forming an alliance with politicians who are planning to form new parties in the Gwangju and Jeolla region.

“If possible, I want to launch the new party before the Lunar New Year in February. Although it’s a tight schedule, I thought it was important to present hope for a new type of politics to the people.”

A team to launch the party will start working this week, and Lee Tae-gyu, deputy head of Ahn’s think tank, Naeil, will be in charge.

“We will hold a conference on Sunday to create a platform and policies for the new party,” Lee said. “Ahn will attend the conference and announce the key principles of the new party and its directions in foreign affairs, defense, social and economic affairs.”

Ahn said on Monday that his goal will be winning enough seats to stop a constitutional amendment. That means winning 100 seats in the 300-seat National Assembly.

“The Maginot line will be stopping the Saenuri Party at all costs from winning more than 200 seats,” Ahn said.

Rep. Moon Byung-ho, who left the NPAD to join Ahn, said the goal for the new party is to become the largest opposition party.

The plan to launch a party in early February also appeared to have considered the Political Fund Act. Under the law, the first quarter’s subsidy for a political party will be paid on Feb. 15, 2016. If Ahn launches a new party with his current allies, it is guaranteed to receive about 2.5 billion won ($2.1 million) under the law.

Including Ahn, five lawmakers have left the NPAD to join the new party. A political party with more than five but less than 20 lawmakers is entitled to receive about 500 million won in a state subsidy every quarter.

If Ahn manages to recruit more than 20 lawmakers, the new party will become a so-called negotiation bloc inside the National Assembly. Negotiation blocs can send representatives to negotiate legislative calendars, and they receive higher state subsidies than smaller parties. If Ahn’s party becomes a negotiation bloc, it will get 1.7 billion won in party subsidies during the first quarter, the same amount as the Saenuri Party and NPAD. It will also receive about 6.8 billion won in additional campaign subsidies.

Ahn’s next mission is to recruit more sitting lawmakers. Rep. Kim Dong-cheol, who left the NPAD to join Ahn, said on Monday that he is asking Rep. Kim Han-gill, who co-founded the NPAD with Ahn last year, to quickly leave the party and bring along his supporters.

The NPAD said on Monday that it will recruit fresh blood in order to maintain its position as the largest opposition party. NPAD Chairman Moon is heading a committee to recruit new politicians to run in April.

“Our candidates for the April election will be very different from those of Ahn’s party, who were hurriedly selected, or those of the ruling party, who were chosen for their ties to the president,” a Moon associate said.

Moon also made clear that he will not lose control over the NPAD leadership despite growing challenges from within.