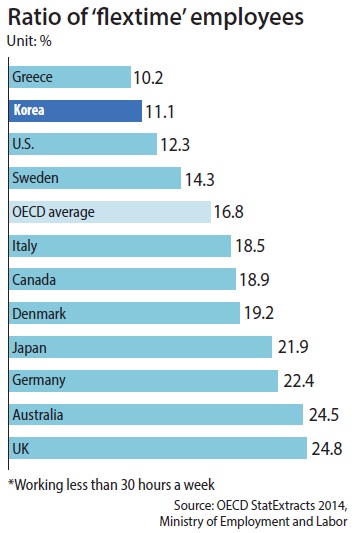 By 2018, all public institutions and companies will adopt flexible working times.

Flexible working hours, which were previously only offered to women employees who were either pregnant or just gave birth, will also be offered to employees who are sick or recovering from an accident.

Even workers preparing for retirement will be eligible to apply for flexible working hours, or “flextime.”

The government confirmed the new measures during a policy adjustment meeting presided over by Prime Minister Hwang Kyo-ahn in Sejong City on Monday. The decision to expand flexible working hours is a response to Korea’s thinning labor force and low fertility rate, which are seen as major threats to the country’s economic sustainability. The government believes flexible working hours will bring women back to the workforce after giving birth and make jobs more flexible for workers in other situations.

The plan announced on Monday is to convert more than 1 percent of each government institution’s jobs, central or local, to work under flexible times. These employees will work under the flexible system for a given period so that they can better focus on child care or recovering from an accident. Once that period ends, they go back to the full-time working environment.

A Ministry of Employment and Labor survey conducted last March on 1,500 adults showed the majority, or 73.6 percent, were interested in flexible working hours, nearly 10 percentage points higher than the previous year.