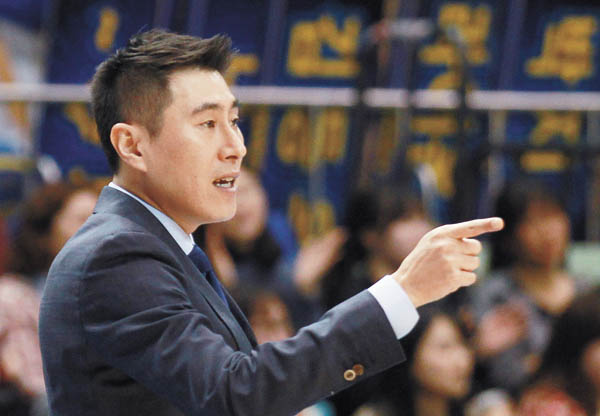 On Dec. 23, 2014, Lee’s Thunders went into the Korean Basketball League (KBL) history books after losing to the Incheon ET Land Elephants 100-46 - a 54-point margin that stands as the biggest loss ever in league history. The Thunders also had the league’s worst win-loss record, at 7-23.

“Since I started playing basketball in the fifth grade, I have never experienced that many defeats before,” Lee said in an interview with the JoongAng Ilbo on Monday at the Samsung Training Center in Yongin, Gyeonggi.

Lee, a former point guard for the Thunders, made his coaching debut last season. But with no big signings in the summer and core players getting sidelined due to injuries, the 43-year-old couldn’t stop the two-time KBL champions from tumbling to the bottom. With mixed feelings of sympathy and ridicule, local fans said in their online communities that Lee had a “tough job similar to those who clean the outside of the 63 Building in Yeouido, western Seoul.” 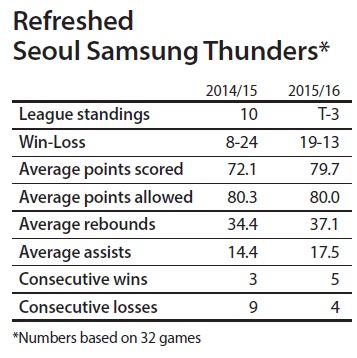 However, 12 months later, the Thunders are a different team now who are accustomed to winning, not losing. And by way of sweet revenge for last year’s humiliating defeat, the Thunders beat the Elephants on Sunday 95-78 and extended their winning streak to five. It was the first time since November 2013 that the Thunders had won five games in a row.

The Thunders finished last season 11-43, but they are now already 19-13 and tied for third place in the league.

“People say that our games are always exciting, but as a coach, every moment is like torture. Players are sending me to heaven and hell with each play,” he said while laughing.

Initially, Lee didn’t want to be interviewed and instead recommended forward Lim Dong-seop and center Kim Jun-il because he credits the players for the team’s turnaround.

For Lee, who has won three KBL titles as a player, taking care of his players is one of his responsibilities, although he acknowledged that the burden of being a coach is heavy.

“I have been telling reporters not to criticize my players, but to blame me,” Lee said. “For players, I told them not to put their heads down because I told them I will take all the criticism.”

Lee, who spent two years as an assistant coach for the Thunders before getting a promotion, said he could have easily quit the job last year after the Thunders were struggling to escape defeat. But advice from his Yonsei University alumni helped him recover his drive.

One of his advisers was retired center Seo Jang-hoon, who is also the all-time KBL leading scorer.

“Last year, Seo told me to alleviate my stress by saying that even Gregg Popovich [the coach of the San Antonio Spurs in the NBA] would have a difficult time managing the Thunders,” Lee said. “Seo knows my personality very well, and he really cared about me.”

Another adviser was Ulsan Mobis Phoebus coach Yoo Jae-hak, who had an experience similar to Lee in the past. Before taking over the Phoebus in 2004 and winning five KBL titles, Yoo finished last in the league with the Incheon Shinsegae Bigs (now the ET Land Elephants) in the 1999-2000 season.

“Yoo told me that everyone grows up with pain and that I should find my own style of basketball,” Lee said.

Lee, who was KBL MVP in 1998 and 1999, said he learned from the experience of being locked at the bottom of the league with the Thunders.

“Whenever we finished the game, I was regretful and reviewed our game,” he said. “As there were no spaces to go down further, I always came to the game with a challenger’s mind.”

“Suffering from the worst situation in the club’s history, we had to refresh our squad completely,” Lee said.

The newly joined veterans are changing the team in various ways. According to Lee, team captain Moon, 37, offers reward money from his own pocket when making a shot from the half line during practices to boost team atmosphere, while the 38-year-old Joo voluntarily proceeds with nighttime practice to show an example to young players. Assistant coaches like Lee Kyu-sup, Park Hoon-keun and Yang Eun-sung are also top contributors to the team, Lee said.

Analysts point out that Lee’s basketball technique is starting to shape the team. On Dec. 10, Lee replaced foreign guard Ron Howard with forward Eric Wise, whose playing style is more like a center. For the 1.98-meter (6-foot-6) forward Lim, who returned to the court this season after having a surgery for his toe, Lee is asking for more offense with 3-pointers.

“Last season, we lost a game that we should have won, but this season, I enter the game with a feeling that we won’t lose to any other team,” he said.

Lee now has the confidence he had when he played for the Daejeon Hyundai Dynat (now the Jeonju KCC Egis) in the late 1990s. With Johnny McDowell dominating the low post, Lee, who had the KBL assists title in 1999, led his team to the regular season title for three consecutive seasons from 1997.

Just like his heydays at Hyundai, the Thunders this season are strong under the basket after grabbing the league’s second-highest number of rebounds per game, at 37.1 per game.

The Thunders gained more confidence last week as they broke the 23-game losing streak with the Phoebus. The Thunders edged the Phoebus 73-72 on Thursday to collect their first win over the Phoebus for the first time in 1,437 days.

“Before the game, I told players that losing 23 times to the Phoebus wasn’t their fault,” Lee said. “After players got the win, they were boosted with more confidence.”

The Thunders, who won their last championship title in the 2005-6 season, are looking to stretch their good luck and have a good Christmas holiday. Although they are facing tough opponents like the league No. 2 Goyang Orion Orions tonight and the No. 5 Jeonju KCC Egis on Saturday, Lee said he really wants the momentum to continue.

“When I was an assistant coach with the Thunders, I experienced six-game winning streaks,” he said. “People say that with this atmosphere, we can be considered title contenders. But I first want us to enter the six-team playoff and advance step by step.”