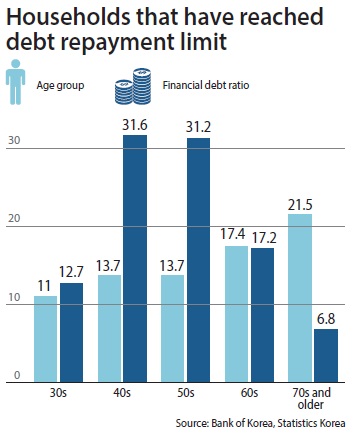 Korea will likely be engulfed by massive housing debts in the next three to four years, largely due to a rapid aging society, the Korean central bank projected on Tuesday.

The Bank of Korea, in its financial report released every six months and submitted to the National Assembly, raised concerns over the impact on the economy of unpaid debts largely owed by older people.

It said the impact of the aging society is highly likely to start appearing in three to four years.

“The rate of Korean population aging is so fast, and the assets owned by people in their 50s and 60s, who should be deleveraging, are largely centered on real estate properties, which could have a huge impact on household debt,” the report claimed.

According to the report, as of March 2014, real estate accounted for 82.4 percent of the total assets of people in their 60s and older. Even those in their 50s had a high ratio of real estate assets, which took up 74.1 percent.

Considering that, on average, people start downsizing their debt at the age of 57, when more people in that age group start to sell off their assets to pay debts, the asset value will start falling, which could cause panic in the real estate market.

The report said the ratio of financial debts to financial assets for those between ages 55 and 74 was between 85 percent and as much as 115 percent. Such a high ratio will only force people to sell off their properties. Even worse, among people in their 60s, 18.5 percent have reached the level where they aren’t able to pay their debts. That is the highest ratio among any age group. The lack of stable income is expected to further contribute to the dire situation.

“We suspect the older generation will start selling off their real estate properties starting in 2018,” a Bank of Korea official said. “The real estate market will be under a heavy burden when such a selloff will overlap with the time when the heated real estate market starts losing steam.”

While every major advanced economy has been deleveraging since the global crisis of late 2008, Korea’s debt in recent years has been breaking new records every quarter.

The central bank aggressively lowered the key interest rate between the second half of last year up until the first half of this year in hopes of bolstering the struggling economy further and encouraged households to take out loans.

As of the end of the third quarter, household debt and credit card purchases have reached a new record of 1,166 trillion won ($991 billion), a 10.4 percent increase from the previous year.

The report urged measures that will help create jobs for older people while encouraging the use of real estate-related financial products, where homeowners can take out pensions while using their house as collateral.