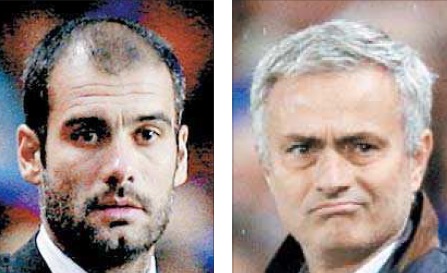 MUNICH - It’s a dream situation, like Lionel Messi and Cristiano Ronaldo becoming available for absolutely nothing while still coveted stars. But this is really happening, off the field.

Jose Mourinho and Pep Guardiola, two of soccer’s shrewdest minds and most successful coaches, are available - one right now, one at the end of the season - with no compensation fees required to buy them out of their contracts.

They are for hire in contrasting circumstances but surely no less desirable. Mourinho’s reputation has been bruised by being fired for the second time by Chelsea. Guardiola is opting to walk away from Bayern Munich at the end of the season, leaving on his own terms in June as he did at Barcelona.

Their availability will put fear into current coaches at Europe’s leading clubs whose jobs just became a lot less secure.

For an owner in need of a quick fix, Mourinho is immediately available and the next major vacancy could well be at Manchester United.

Louis van Gaal has faced the wrath of United fans during a six-game winless run which includes embarrassing losses in succession to Premier League newcomers Bournemouth and Norwich. Lose again at Stoke on Saturday and his position could be weaker.

Mourinho and United sometimes seems a match destined to happen. For a club fixated on amassing commercially appealing players, who better to occupy the dugout than one of its biggest characters who brings a track record of glory?

Mourinho seemed to try to seduce United two years ago before Alex Ferguson’s retirement in 2013. After revealing he pays for a subscription for United’s television channel, Mourinho ensured there was no gloating after his Real Madrid team won at Old
Trafford.

Mourinho later portrayed it as his choice not to seek the United job, opting instead for a return to Stamford Bridge which lasted only two years.

Now Mourinho could be the manager required to deliver that much-needed adrenalin shot to a disjointed squad, which has crashed out of the Champions League in the group stage after only just rejoining Europe’s elite.

Although his Chelsea firing was over a “palpable discord’’ with his players as Mourinho presided over the worst-ever defense of a Premier League title, a good coach doesn’t suddenly become a dud within seven months.

Mourinho’s desire to prowl the touchline again seemed clear at the weekend. He remained in London, with a statement from his management company emphasizing: “He will not be taking a sabbatical, he isn’t tired, he doesn’t need it.’’

Mourinho’s next employer will be hoping his final months at Chelsea were an aberration from a previously strong coaching career.

Even before Bayern Munich announced on Sunday that Guardiola would be leaving at the end of the season, the 44-year-old former Barcelona coach was already being linked with the Manchester City job still occupied by Manuel Pellegrini.

“He is seeking a new challenge, and he almost apologized for that,’’ Bayern Munich chairman Karl-Heinz Rummenigge told German daily Bild on Monday, a day after Guardiola’s decision to leave at the end of the season was revealed.

“I think I know where he is going,’’ Rummenigge added. “But I would like to leave the announcement to him or his new employer.’’

Pellegrini can hardly complain if his successor has already been lined up as he had been approached before the firing of Roberto Mancini, who had himself been lined up when Mark Hughes was dismissed in a chaotic coaching change at City.

“Pep Guardiola will work here,’’ an unusually candid Pellegrini said over the weekend. “I don’t know if it will be next season here at City, or even at another club, but I am sure that one day he will come to the Premier League.’’

Although Guardiola has never worked in England, Manchester City has the Camp Nou ethos now engrained throughout the Abu Dhabi-owned club. On a day-to-day basis it is being run by former Barcelona executives Ferran Soriano and Txiki Begiristain.

It was while at Barcelona that Guardiola made an immediate impact as a first-time manager by sweeping to 14 titles over four seasons before joining Bayern.

It is the Champions League acumen of two-time winners Mourinho and Guardiola that is in demand. AP