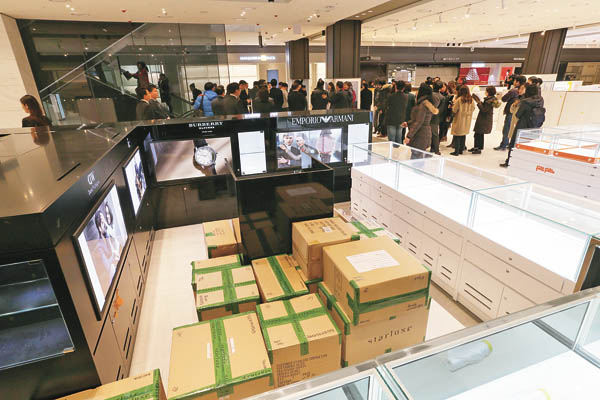 Built in the mid-1980s, Hanwha 63 City - better known as the 63 Building - has long been considered a milestone of modern prosperity and development as the country rebounded from tumultuous times.

Hanwha Galleria, a retail unit under Hanwha Group, is poised to tap into the symbolic 63-story building when it opens its first duty-free shop on Dec. 28.

President and CEO Hwang Yong-deug of Hanwha Galleria said on Tuesday that the upcoming Galleria Duty Free 63 will be different from competitors by offering “unique experiences” for customers.

“So far, the duty-free business somewhat guaranteed success,” Hwang said. “But now, there are more duty-free shops across Seoul, so we need to carve out our own niches.”

He said Hanwha plans to revamp an aquarium and restaurants, and build a new art gallery in 63 City to make the premises a more attractive spot for tourists.

The Hanwha affiliate set a sales target of 504 billion won ($429 million) in 2016 for the new outlet and an accumulated 3 trillion won by 2020, including sales at the company’s existing duty-free shop at Jeju International Airport.

The new shop will feature a total of 369 cosmetics and luxury designer brands, and will take up the first four floors of the building, occupying 10,153 square meters (109,286 square feet).

However, not all shops will be available by the opening date. The December launch will be a partial opening where only 60 percent of the premises will be ready for customers. The rest will open in the coming months with an official grand opening scheduled for March.

With only one duty-free venue at Jeju International Airport, Hanwha Galleria has been overshadowed by big players like Lotte and Shilla in the traveling retail sector.

But the retailer, which also owns Galleria Department Store, gained traction when it won the rights to run a new tax-exempt outlet in Seoul back in July. A joint venture between Hyundai Development and Hotel Shilla also gained a separate right to operate a duty-free shop, while Lotte Duty Free lost out on a license.

Kim Dong-seon, the third son of Hanwha Chairman Kim Seung-youn who works at Hanwha E&C, is involved in a task force for the new duty-free shop, another indication that the group considers the project crucial.

Hanwha Galleria said it will target Chinese tourists as it expands. It will open five offices in China next year to attract more Chinese visitors, and the number of regional offices in the country will increase to 30 by 2019, according to a statement released by the company.

Hanwha also plans to sign partnerships with some 200 tourism companies in China.

The joint venture’s duty-free shop will be in Hyundai’s I’Park Mall in Yongsan District. Shilla Hotel will draw on its experience running duty-free shops and attracting local and imported brands. Hyundai Development will be responsible for managing the remodeling of the space and development of the interior.

The venture will offer more than 400 brands.