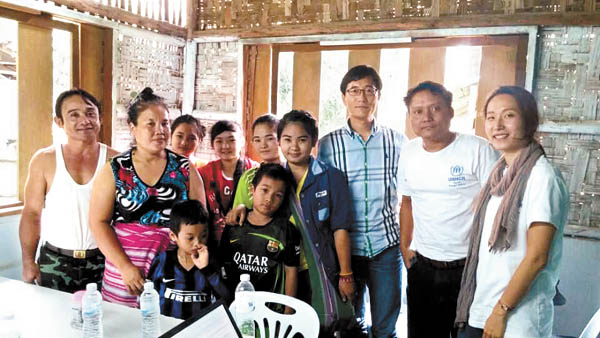 South Korea will permit 22 Karen refugees from Myanmar to enter the country today, the first time it has accepted refugees seeking resettlement in a third country, the Ministry of Justice announced on Tuesday.

The government said that the group, which comprises four families - 11 adults and 11 children - fled Myanmar and had been living in the Mae La refugee camp in Thailand. They will arrive at Incheon International Airport this morning.

“I heard the education environment in Korea is superb,” said Kh Too, 43, one of the men in the group, who lost his right foot in an accident in 2006 while cutting down trees. “I hope for nothing but good teachers for my children.”

Kh Too fled Myanmar in 1993 to escape oppression from the country’s military junta, which persecuted Karen people and other ethnic minority groups.

He sought political asylum in Thailand with his wife and now lives with five children and a relative. The camp has about 40,000 refugees, and 93 percent of them are Karen.

A Justice Ministry official in charge of the resettlement said that electricity, toilets and water in the camp were limited.

Their entry marks the first time Korea has accepted refugees through the resettlement program under the Office of the United Nations High Commissioner for Refugees (UNHCR), which supports the transfer of refugees from asylum states to a third country.

South Korea was the first country in Asia in 2013 to enforce the Refugee Act, which stipulates that the government will accept refugees through the UN-led program.

The Justice Ministry said in April that it would accommodate 30 refugees annually in the next three years as part of a pilot program.

The 22 refugees from Myanmar have already gone through several steps of a thorough screening process.

In August, the ministry reviewed a list of refugees recommended for resettlement in Korea, whose identities and backgrounds were checked by the National Intelligence Service.

Selected refugees were questioned and underwent medical examinations in October, and travel permits were granted in December by the Korean Embassy in Thailand.

The 22 Karen refugees will be granted refugee status and F-2 visas under the care of the Korea Immigration Service, and receive job training and Korean-language courses.

As of the end of October, South Korea had approved 531 applications for refugee status.

According to data by the immigration service, the number of applicants seeking refugee status here has surged over the past two years since the introduction of the Refugee Act.

In 2014, the number of people who applied for refugee status increased by 80 percent to 2,896 from a year earlier.