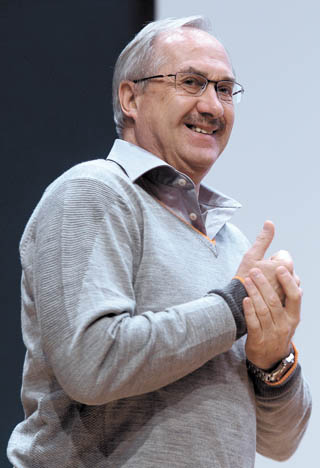 Korea men’s national football team coach Uli Stielike during the Asian Cup in January. In 2015, Stielike’s team had only one loss in 20 international matches. [AP/NEWSIS]

Korea men’s national football team coach Uli Stielike had a fantastic year as the Taegeuk Warriors achieved an 80 percent winning percentage this year. It was the best performance since 1980, with 16 wins, three draw and one loss.

Stielike, who took the job last September, is usually talking about football. But earlier this month, in the year-end Korea Football Association press meeting, the 61-year-old German talked about his personal life and events not connected to the national team.

Here are 11 things you might not know about Stielike:

KFA technical committee head Lee Yong-soo brought Stielike to the national team after their meeting in London last year. In a previous interview, Lee said his first impression of Stielike was a “traditional German grandfather.” For Stielike, he thought the 56-year-old Korean wasn’t the type to be involved in football.

“He was small, but had strong power,” Stielike recalled. “If I had to pick a sport discipline, I thought he was a gymnast or a taekwondo practitioner.”

Stielike said he liked to go out to Itaewon in his free time. The former Switzerland and Ivory Coast national team coach added that there is a shuttle bus that travels between his house and Itaewon.

“Seoul’s parking problem is complex,” he said. “But I can go to Itaewon without a car. It has many places to dine out and drink. Gangnam is too far away for me to go.”

“Wherever you go in Korea, there is delicious meat,” he said. “The beef that you eat with your closest people with beer or wine is the best.”

When asked about hobbies, Stielike gave a typical answer for a football coach: watching football video clips. In his house, there is a room where he watches and analyzes football.

“When I go to that room, I spend almost all day there,” he said. “My wife doesn’t like this. She always asks me when I will come out from that room.”

Stielike, nicknamed “the stopper” in his days playing midfielder and sweeper, is considered one of the greatest footballers to play for Real Madrid. He played for the Spanish giant from 1977 to 1985 after transferring from Borussia Monchengladbach. When asked whether he is a fan of FC Barcelona, the answer was obviously “no,” but he did admit that Barcelona is playing attractive football.

“When you look how FC Barcelona has played in recent years, it is playing high-quality football,” he said. “There are good teams in Europe, but Barcelona is consistent. But don’t get me wrong, I’m not a Barcelona fan.”

Stielike said that he doesn’t only watch football clips of the Korean national team. The former FC Sion and Almeria coach emphasized that there are three European teams that he always watches.

“In Korea, I have to watch broadcasts of local channels which mainly show matches that Korean footballers play,” he said. “I don’t miss Swansea City, Tottenham and Augsburg matches.”

Stielike turned out to be a man of romance. He fell in love with the woman who was to become his wife at the age of 18, and has held that love for 39 years. The German, born in Ketsch, said he first met his wife when he was focusing on graduation studies.

“My wife didn’t know that I was playing football,” he said. “We got married a year before I transferred to Real Madrid. I know lot of coaches who live away from their wife, but my wife has always been with me for 39 years.”

Stielike’s football talent may be inherited from his parents. His father was a footballer and his mother was a handball player. Stielike has a son and a daughter, and both are living different lives. Stielike said they have yet to visit Korea and don’t even care about what he has achieved in Korea.

“My daughter is married to a doctor, and she is an office worker at his hospital,” Stielike said. “My son isn’t married, and he lives freely in his own world. He currently runs a wind surfing academy in Spain.”

Stielike has succeeded as a footballer and is building a good reputation as a coach. But he said that he never imagined becoming a footballer when he was a child.

“I had a passion for football, but until 17, I never thought about becoming a professional player,” he said. “After I got selected into the Under-18 German national team, I started to dream of being a pro player.”

These days, there are agents who manage footballers’ transfers, wage negotiation and other personal surroundings. But Stielike said that wasn’t his case in his days as a player.

“When I was a player, I had no agent, and I had to review and sign contracts on my own,” he said. “The first time I worked with an agent was six years ago when I was moving from FC Sion to Qatari club Al-Arabi.”

Many people might think Stielike’s most memorable comment of the year might be his message in Korean after finishing second in the Asian Cup this January in Australia. Stielike said in Korean, “People of Korea, it’s alright to be proud of our players.”

But that wasn’t his choice. “My best word is ‘Wihayeo!’ [‘Cheers’ in Korean],” he said. “When I have a drink with staff and give a toast, saying “Wihayeo” still remains in my memory.”