After struggles, pair is back on top

After struggles, pair is back on top 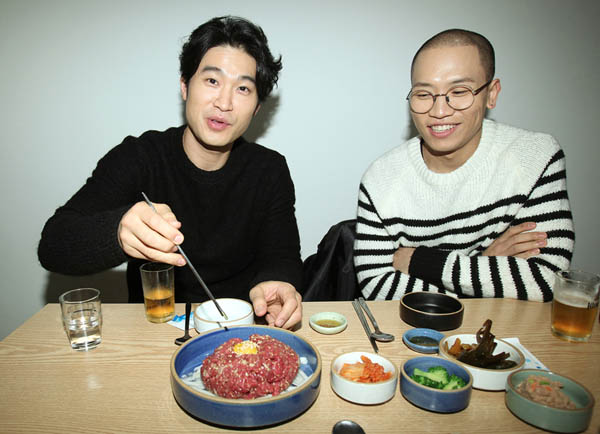 Dynamic Duo, consisting of Choi Ja, left, and Gaeko, share their thoughts on the hip-hop scene and more. [PARK SE-WAN]

The last few years have been quite a roller coaster ride for hip-hop pair Dynamic Duo.

With hits like “Ring My Bell,” the duo, which debuted in 2004, has undoubtedly been one of Korea’s top hip-hop acts for about a decade.

Consisting of Choi Ja and Gaeko, Dynamic Duo also set up its own talent management company, Amoeba Culture, and has produced successful groups, like Supreme Team in 2009.

After the two finished their military service, they came back in 2013 with their seventh album, “Lucky Numbers,” proving that they were irreplaceable.

But rapper E SENS, a member of Supreme Team, canceled his contract with Amoeba Culture in July 2013 and released a song, “You Can’t Control Me,” targeting and criticizing Dynamic Duo. Gaeko also fought back with a song of his own, starting an unprecedented hip-hop feud in the Korean music scene.

Not long after, a paparazzi photo revealed that Choi was dating Sulli, a former member of the K-pop girl group f(x). The link between Choi, with his bad boy image, and Sulli, a sweet girl next door, made headlines and even angered fans of Sulli. Since then, Amoeba Culture has gotten better at crisis management, for one.

Although Ilgan Sports, an affiliate of the Korea JoongAng Daily, had planned to interview the pair two years ago, it was postponed for these reasons.

Only recently, after the release of their latest album, did the two sit down for an interview.

Q. When did you get into hip-hop?

Gaeko: When we were in middle school, Korea got a glimpse of real hip-hop. We saved our allowance to buy albums and took turns to listen. We were totally crazy about hip-hop. We memorized English-language rap and performed at school events. We were quite the stars. Students looked up to us. But after our performance, we were scolded by our English-language teachers, as the rap contained many swear words.

Let’s go back to how you set up your own company.

Gaeko: We actually debuted in 2000 as CB Mass with one more member. In four years, we released three albums. But our talent management agency was suddenly merged with another company, and the three of us, who were technically under contract with the company, were left indebted to the company. That’s when another company scouted us, paying all our debts for us.

Choi Ja: Not long after, the company let us go, saying we should freely pursue our own music.

The biggest gem your company found seems to be Zion.T.

Choi Ja: Yes. We began in a tiny 46-square-meter [495-square-foot] room [with just me, Gaeko and three others.] For the first few years, we couldn’t even pay our employees.

Gaeko: But today, we have a separate recording studio and whopping 19 employees, excluding artists. It feels really nice to see Zion.T in the spotlight nowadays. But he is also finding the tight schedule quite hard to handle. But what can you say? He is so talented. The people recognize that and want him.

How did the 2013 high-profile hip-hop feud affect your music?

Gaeko: It made us think a lot about our relationship with the people. I guess the incident is something that will keep following us throughout our careers.

Choi Ja: As the CEOs of a talent management company, we sell culture. And I guess that image [as CEOs] comes off strong. And that image certainly took a toll on us. But can you really fight a shadow? No, you can’t. We’ve come to accept it. Still, we love doing music.

Do you believe Dynamic Duo’s rap never gets old?

Choi Ja: There are those seniors who get along well with young people. That’s the kind of person I want to be: to be able to empathize with people of all ages.

Gaeko: I do think the hip-hop scene will continue to evolve in terms of format, like beat density or music composition. But we will continue to develop skills in addition to years of know-how we’ve accumulated. If we don’t work on new skills, we will certainly get distanced from the contemporary music scene. I guess we will continue to study, for as long as we are in the scene.