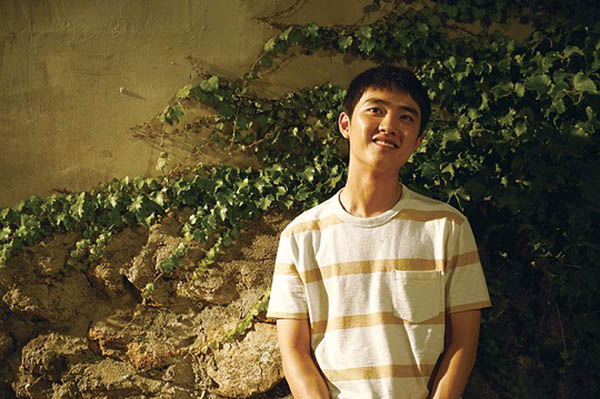 Still images from the upcoming film “Pure Love” were unveiled on Wednesday.

In a series of photos, Do Gyung-soo, also known as D.O., and Kim So-hyun perfectly emulate teenagers from the 1970s.

The production company of the melodrama film added that it will be released sometime in February.

The movie tells the story of a radio DJ who receives a love letter sent from 23 years ago.

The film is Do’s second feature film after his previous project, “Cart” (2014).

Although Do debuted in the music scene as a member of the K-pop boy group Exo in 2012, he began acting in 2014 by playing a supporting role in the drama series “It’s Okay, That’s Love.” The 22-year-old singer received rave reviews for his portrayal of a troubled teenager who is abused by his own father.

Do is also slated to appear in another film titled “Older Brother” with actor Cho Jung-seok of “The Exclusive: Beat the Devil’s Tattoo” (2015) and actress Park Shin-hye of “The Royal Tailor” (2014) next year.

Do’s fictional love interest, Kim, is one of the most up-and-coming teenage actresses. She debuted in 2006 at the age of 7 and has been appearing in numerous films and drama series, including “The Girl Who Sees Smells” (2015), “Reset” (2014) and “The Suspicious Housekeeper” (2013).

The film was shot in Goheung County, South Jeolla.