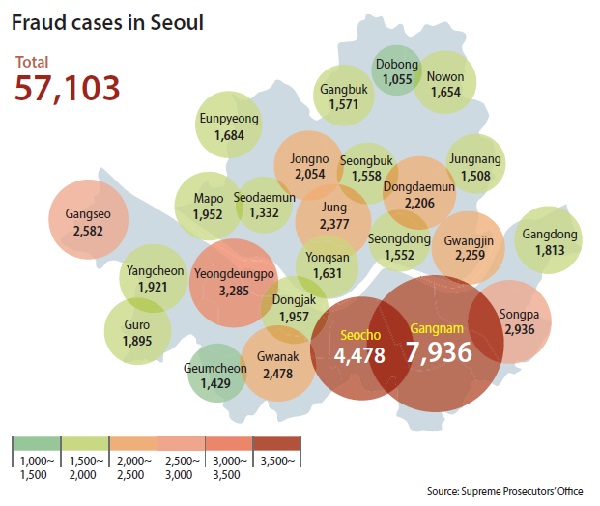 When detective Lee Sang-bae heard that a plastic surgeon in his neighborhood had swindled 16 women out of a total 55 million won (about $47,000) earlier this year, he could instantly visualize the plaintiffs. Having led Gangnam Police Precinct’s economic crime investigation division for some time now, it was all too clear.

“They all turned out to be wealthy women living in high-end apartments, wanting top-quality plastic surgeries with absolutely no worries about the financial costs,” Lee recalled. “It was the typical - what we call - ‘Gangnam style fraud’: rip-offs having to do with cosmetic surgery and luxury items.”

“Most people tend to be duped by voice phishing, but this doesn’t apply to Gangnam residents,” he added. “They tend to be involved in cases in which they lose significantly more money.”

The Gangnam-style fraud, as Lee and his colleagues put it, has increased so much now that the district has recorded the highest number of fraud cases nationwide for 11 consecutive years, prosecutors say, ever since such data was compiled.

Last year, 7,936 cases were reported to the police there, which is nearly one-third of the 244,008 national total. The adjacent district of Seocho had the second-highest fraud rate, at 4,478, or nearly half the number in Gangnam.

When asked why the neighborhood has so long been vulnerable to financial deception, experts asserted that con artists found it easy to swindle its residents out of cash, as the victims' top priority is to build a fortune, and they’re willing to make hefty investments to gain more.

Fraud cases in Gangnam, according to the officers from the Gangnam Police Precinct, often involve plastic surgery, real estate, luxury items and substantial investments worth over 10 billion won.

And cases that initially begin in Gangnam tend to branch out nationwide: Given the district’s affluent reputation, many victims blindly put their faith in these hustlers, police officers interviewed said.

“You can gain trust simply by telling people you live in Gangnam,” said one officer.

In October, a 47-year-old man was arrested for allegedly scamming some 30,000 people out of a total of 72 billion won since March. The suspect established a company in Gangnam - on paper, a cosmetic franchise - and over months opened 72 branches in other cities, promising a monthly dividend of 8,000 won for every 70,000 won bank account.

He was arrested in early October.

“I trusted him because he seemed to have a really stable office in the middle of Gangnam,” said one of the victims, 57. “If [the company] had been placed in Gangbuk, I wouldn’t have believed him.”

According to Kwack Dae-gyung, a police administration professor at Dongguk University in Seoul, it’s difficult to compare fraud in Korea to that in other developed countries since each country has different standards for their data.

“But just by comparing the sheer number of fraud cases per every 100,000 population, Korea consistently has higher rates than Japan and the United States.”

A report by the Korean Institute of Criminology backs up that claim, showing that there are nearly 10 times more fraud cases in Korea than in Japan.

Lee Soo-jung, a criminal psychology professor at Kyonggi University in Suwon, Gyeonggi, added that the problem, in large part, stems from the fact that so many Koreans - unlike their Japanese and American counterparts - tend to rely on the Korean sentiment of togetherness, known as jeong.

Financial transactions often spin into fraud when people trust one another so much that they skip relevant legal procedures and hand over their cash on the assumption that they are acting out of brotherhood and goodwill.

The rise in information technology has also increased the interconnectedness of Korean society, enabling swindlers more anonymity and an outlet to expand their victim pool.

Only 32.3 percent of online fraud cases was busted by police last year. All in all, suspects in some 70 percent of such cases are caught every year, which is far lower than the 90-some percent in murder or robbery cases.

In 2014, only 1 percent of the money victims lost in fraud cases was retrieved. Some 8 trillion won was lost and 73 billion won reclaimed. Worse, victims in 64 percent of those cases didn’t recollect a single penny.

According to Roh Myung-sun, a professor at Sungkyunkwan University Law School, penalties for fraud in Korea are too lax - a person who scams less than 100 million won, for example, is usually subject to six to 18 months in prison.

“Domestic laws divide these cases into either general fraud, online fraud or habitual fraud,” Roh said. “It’s time the country specifies the charge into smaller categories and lengthens jail terms, like in Germany, which has insurance fraud and government subsidy fraud, among others.”